In the past if you wanted to purchase a high-end server capable of handling huge workloads it would typically come with four CPU sockets and maybe 1 TB of memory.

Today you can buy a 12G Dell PowerEdge R920 with 6 TB of memory and up to sixty cores (120 threads) of processing power (see Figure 1 below). Couple that with up to twenty-four 2.5-inch disks 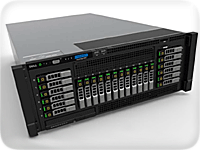 and ten PCIe slots and you have the makings of a versatile server.

Dell introduced a new memory cartridge feature with the 12G PowerEdge R920, providing a whopping 96 DIMM slots spread over eight cartridges. (Note: A 13G PowerEdge R930 server is in development and is expected to be released by Dell soon.) A disadvantage to large amounts of memory is the initial boot time required to test it all, but that should happen infrequently. A Plethora of Hardware Options

One of the biggest challenges when purchasing a PowerEdge R920 is deciding how to configure the system. The extensive list of available hardware options makes it possible to build a server capable of a wide range of tasks.

Our review PowerEdge R920 came with an Intel 2P X540/2P I350 rack network daughter card (RNDC) that included two 1-GbE and two 10-GbE ports. This card plugs into a dedicated PCIe slot and offers a variety of options depending on the daughter card. Options are available from a variety of network vendors, including Broadcom and QLogic.

You can also choose 2.5-inch SATA or SAS SSDs should your budget not support the higher cost NVMe disks. Dell even offers solid state disk options specifically tuned for both read or write intensive workloads.

While our review unit came with Windows Server 2012 R2 preinstalled, the PowerEdge R920 supports VMware ESXi and several flavors of Linux as well. Windows Server 2012 R2 will use the NVMe disk as part of a tiered storage pool should you choose to configure it that way. We ran several performance tests on a single NVMe drive using the ATTO disk benchmark tool and saw sustained read rates of over 2 MB / Sec (see Figure 2 below). To test out VMware 5.5, we downloaded the Dell custom ESXi image and installed it to a USB drive. Since our review system did not come with an abundance of local storage, we connected to an InforTrends DS1000 over iSCSI to load up a number of virtual machines.

As you might expect, the PowerEdge R920 runs VMware quite well and would support a ridiculous number of VMs with the installed 512 GB of memory, not to mention a full complement of 6 TB.

Dell offers its Fluid Cache software that uses the Express Flash PCIe disks, if installed, to achieve high levels of throughput. While we did not test this capability during this review, the published numbers show impressive performance. Dell has a number of white papers available on their websitewith specific applications that take advantage of the Express Flash PCIe storage.

Dell’s latest iDRAC7 provides all the tools you’d typically need to remotely manage any of the company’s servers. The PowerEdge R920 includes a separate management network interface for out-of-band control and monitoring. Figure 3 shows the main iDRAC page and the available options. OpenManage Server Administrator (OMSA) is Dell’s newest management console, and it provides a single interface to manage both local and remote servers. Dell OpenManage Essentials (OME) offers a web-based management console and can be downloaded for free from Dell’s website.

Figure 4 shows the Devices Manage screen from OME with the PowerEdge R920 selected. A DVD with additional management tools and documentation was also included in the box.

The Dell PowerEdge R920 delivers an enormous amount of capability in a 4U chassis. It’s not hard to imagine consolidating a whole rack of older servers with one of these units. You can throw pretty much any workload of any size at this thing and it won’t even skip a beat.

Dell Ups Its Game with the T630 Tower Server