The HPE SimpliVity 380 Server was designed to deliver the high performance required by enterprise data centers in a simplified package. One of the key differentiators made by a large majority of the new wave of IT innovators is in how they bring simplicity to the complexities of the legacy data center. With the massive amount of data that is now stored, accessed, and transferred across networks, adding simplicity to the administration of these systems can lead to reduced downtime and business costs, as well as increased productivity. 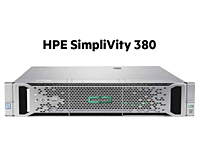 HPE describes the architecture of the SimpliVity Data Virtualization Platform as “a globally aware file system and object store with data optimization techniques and data services.” Always-on data deduplication and compression in the HPE SimpliVity 380 design enable consistent performance across the board.

The total solution combines a hardware add-in board and the industry-leading HPE ProLiant DL380 into a hyper-converged workhorse. This hyperconverged system can deliver 52:1 data storage efficiency and back up a 1 TB virtual machine in under 60 seconds.

Simplification alone is great, but if it comes at the cost of performance it probably won’t garner attention in most IT organizations today. The HPE SimpliVity 380 delivers both and does so in spades. In-line deduplication reduces the overall amount of I/O required to store data on disk, while compression reduces the size of the data blocks that must be written to disk, further reducing the I/O bandwidth. Couple this with the HPE OmniStack software and you have a fully integrated solution to handle any VMware vSphere workload.

The founders of SimpliVity saw an opportunity from the early days of the company to deliver a product that combines hardware and software running on x86 servers. On the hardware side, the special sauce was a PCIe device, now called the HPE OmniStack accelerator card, that offloaded the compression and deduplication functions in much the same way as TCP offload devices accelerate network traffic. This approach takes a significant amount of the computation burden off of the primary host CPU and reduces the amount of I/O operations required.

The HPE SimpliVity 380 uses a globally aware file system and an object store to write the compressed and deduplicated data to disk. This architecture adds a layer of abstraction on top of the underlying hardware and makes it possible to create time-based copies. It also facilitates moving virtual machines (VMs) and data from one system to another anywhere in the world. Full details of the HPE SimpliVity 380 architecture is described in this HPE white paper.

Choices abound for the basic HPE ProLiant DL380 Gen10 platform with a wide range of disk, processor, memory and networking options. HPE recommends minimum configurations to include at least 256 GB of memory and two nodes in order to realize all the benefits of high availability.

At the software management level, Simplivity made a conscious decision to integrate with the VMware vCenter Server product. This design plays to the large population of system administrators already familiar with VMware and the management of their virtual infrastructure. HPE SimpliVity 380 Gen10 currently supports VMware vCenter 6.5 and 6.7. It also supports Microsoft System Center 2016 for Windows environments. Following the simplicity theme, SimpliVity made common practices like the cloning of VMs a simple two-click operation (see Figure 1). While some basic assumptions, such as the target datastore and host based on the original VM, may restrict this to a reduced number of situations, it does meet the need of the vast majority of clone operations. At the top level, the HPE SimpliVity vCenter plugin provides a dashboard (see Figure 2) showing the uncompressed and non-deduped data along with the overall savings delivered by both techniques.

Figure 3 shows the Search Backups dialog, which provides a way to quickly filter a large backup repository to find the file of interest based on multiple query fields.

It’s also important to point out here that SimpliVity uses backups where other solutions might use a snapshot. Figure 4 shows the backup dialog including the restore files option, providing access to individual files within a backup. The HPE SimpliVity 380 was designed to easily scale to serve constantly changing user needs. It can expand to include up to 96 nodes, each of which can support a large number of fully-protected VMs. Each node offers anywhere from 128GB to 3072GB of memory per node, depending on the configuration. A networked collection of nodes at both local and remote sites are managed as a single entity

Single HPE SimpliVity 380 Gen10 nodes start around $4,385 with OmniiStacks of the 380 starting around $12,500. It’s also possible to customize your HPE 380 based on specific needs. At this point in time, the HPE SimpliVity 380 management happens using the vCenter plug-in.

Comparisons to other products like VMware VSAN are difficult at best due to the totally different architecture and implementation of the two offerings. The HPE Simplivity 380 requires only two nodes for full high availability and data protection while a typical VSAN deployment requires three nodes.

It is possible to operate a VSAN cluster with only two nodes, but it’s not the recommended method. HPE also offers its StoreVirtual VSA product as a software-only alternative, but you wouldn’t get the benefits of the OmniStack accelerator card.