If you’re planning the data architecture for your organization, chances are good you’re considering blade servers. This server structure is a go-to choice for packing lots of power into small spaces. But there’s lots of ways they differ from other server structures, like rack or tower servers, and those differences will have a big impact on how your data center performs and runs. Let’s talk about what you need to know before you invest. 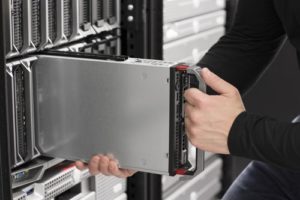 A blade server is a type of server architecture that has a single chassis that houses multiple server modules, known as “blades.” The chassis provides the power supply and enclosures for the blades, but because of the way they are constructed and enclosed, blade servers can run well independently of each other, or in concert with each other.

Each blade is self-contained in its own enclosure, with its own CPU, RAM and storage. The main benefit to this type of architecture over a more traditional rack server is mainly space. The blade servers can house more components in a smaller space than other types of server architectures. Because each blade can slide easily in and out of the chassis, the blades themselves are easier to expand and easier to maintain than other types of options. Each blade server can run independently with its own management system, which usually includes a network or storage switch. Blades can also be clustered to operate together.

Blade servers are typically more expensive than rack servers, often costing as much as $12,000 each. But there are important reasons why IT leaders choose to invest in this architecture, including:

What are Blade Servers Used for?

This, combined with their efficient use of energy, make blade servers excellent when large amounts of power are needed to do singular, non-core tasks, such as:

While blade servers offer users many advantages, there are many reasons why they aren’t perfect for every use case. For instance, blade servers have proprietary slots, which can limit expansion if your needs don’t sync up with what’s offered.

Blade servers also require the power to be off to complete specific functions. The automated turning off and turning on of the servers can create data bottlenecks and downtime that have to be planned around. It can also put the entire chassis at risk if there’s a power outage or malfunction—an issue other server options don’t have.

Regardless, blade servers offer one of the most popular server configurations available today. With the right research and architecture, they can work for you, too.