When it comes to server virtualization software technology offerings, you might not require every bit and byte of programming they’re composed of, but you’ll rejoice at the components of their feature sets when you need them.

These solutions scale from a few virtual machines that host a handful of Web sites, virtual desktops or intranet services all the way up to tens of thousands of virtual machines serving millions of Internet users. If you don’t know all the virtualization software names on this list, it’s time for an introduction. 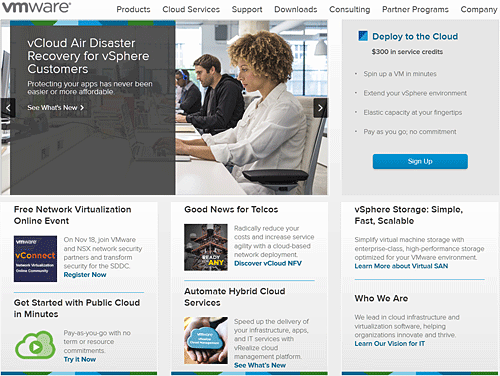 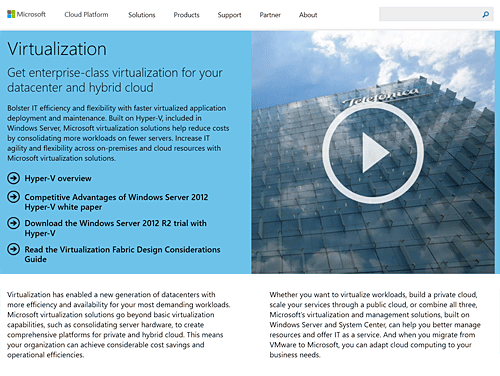 Microsoft came up with the only non-Linux hypervisor, Hyper-V, to compete in a tight server virtualization market that VMware currently dominates. Not easily outdone in the data center space, Microsoft offers attractive licensing for its Hyper-V product and the operating systems that live on it.

For all Microsoft shops, Hyper-V is a viable solution that has only gotten more competitive in the virtualization space with each new Windows Server release. Microsoft has also been steadily gaining traction with enterprises looking to leverage the company’s Azure cloud services as well as those interested in managing both on-premises Hyper-V services and Azure services. Citrix was once the lone wolf of application virtualization, but now it also owns the world’s most-used cloud vendor software: Xen (the basis for its commercial XenServer). Amazon uses Xen for its Elastic Compute Cloud (EC2) services. So do Rackspace, Carpathia, SoftLayer and 1and1 for their cloud offerings. On the corporate side, you’re in good company with Bechtel, SAP and TESCO. For the past 15 years, everyone has recognized Red Hat as an industry leader and open source champion. Hailed as the most successful open source company, Red Hat entered the world of virtualization in 2008 when it purchased Qumranet and with it, its own virtual solution: KVM and SPICE (Simple Protocol for Independent Computing Environment). Red Hat released the SPICE protocol as open source in December 2009.

The company’s renowned Red Hat Enterprise Virtualization (RHEV) desktop and server virtualization platform is based on the KVM hypervisor and Red Hat’s Enterprise Linux (RHEL) server operating system. RHEV is based on open standards and works with Linux and Windows, as well as enterprise applications like SAP, SAS and Oracle. If Oracle’s world domination of the enterprise database server market doesn’t impress you, its acquisition of Sun Microsystems has made it an impressive virtualization player. Additionally, Oracle owns an operating system (Sun Solaris), multiple virtualization software solutions (Solaris Zones, LDoms and xVM) and server hardware (SPARC). What happens when you pit an unstoppable force (Oracle) against an immovable object (the Data Center)? You get the Oracle-centered Data Center. 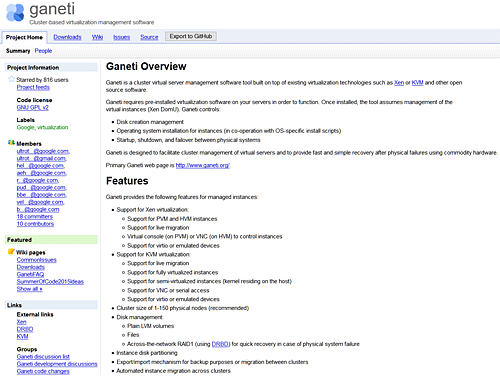 When you think of Google, virtualization might not make the top of the list of things that come to mind, but its Google Apps, AppEngine and extensive Business Services list demonstrates how it has embraced cloud-oriented services.

The company’s open source Google Ganeti cluster virtual server management software tool is built on top of existing virtualization technologies like Xen or KVM and essentially serves as a wrapper around these hypervisors to help system admins set up clusters. These are the two main reasons why the world’s largest hosting companies choose Parallels. But the innovation doesn’t stop at Linux-containerized virtual hosting. Parallels has also developed a containerized Windows platform to maximize the number of Windows hosts for a given amount of hardware.

While Parallels remains best known for its desktop and application virtualization offerings, including Parallels Desktop and Server products for Mac, the company’s Service Provider business has since been rebranded as of March 2015 to Odin, and its Parallels Cloud Server offering has been renamed Virtuozzo. Virtuozzo allows applications to run in lightweight, separate containers, and Odin has been working closely with both Docker and Google on container standards.

Huawei is one of the newer players on the virtualization scene, having launched its enterprise business in 2011. While still relatively unknown in the U.S., Huawei has established a strong market base with telcos and in emerging markets and countries like China, Brazil, Russia and India. Virtual Bridges is the company that invented what’s now known as virtual desktop infrastructure, or VDI. Virtual Bridges’ VERDE product has allowed companies to deploy Windows and Linux Desktops from any 32-bit or 64-bit Linux server infrastructure running kernel 2.6 or above. (You can learn more about this Desktop-as-a-Managed Service by downloading the VERDE whitepaper.)

In February 2015, NIMBOXX acquired Virtual Bridges’ VERDE VDI business. NIMBOXX currently uses the VERDE VDI technology as a turnkey offering for virtual desktop workloads and also as part of its broader mission of delivering software-defined data center-in-a-box solutions to companies of all sizes.