With the interest level surrounding hyper-converged appliances continuing to rise, it comes as no surprise that big OEM vendors like HPE want to get in on the action.

HPE’s all-in-one-box solution is the HC 250, which packs up to four nodes into a single 2U chassis. It comes in two basic flavors with support for both VMware and Microsoft’s Cloud Platform Systems – Standard.

The HPE Hyper Converged 380 is the newest member of the family and is based on the popular DL 380 Gen9 server. This product starts with a minimum of two physical servers and scales up to as many as sixteen nodes.

With a front-panel storage capacity of up to twenty-four small form factor (SFF) drive slots, it’s possible to max out the unit at 25.2 TB of storage per appliance with the current software. This will only increase over time.

HPE’s secret sauce for both of these systems is in the company’s simplified OneView InstantOn (OVIO) deployment tool. This menu-driven question and answer tool takes the majority of the pain out of configuring multiple machines for clustering, networking and storage.

On the storage side, HPE uses its StoreVirtual VSA (Virtual Storage Appliance) product for both the HC 250 and HC 380. StoreVirtual VSA takes the place of VSAN for VMware and Storage Spaces on the Microsoft side. We’ll look at this feature in more detail in a bit.

With the HPE DL380 used as the basic building block, the HC 380 requires a minimum of eight disk drives plus 10Gb networking added in. A minimum of 128GB of memory is the recommended starting point with a range of options for number of CPU cores.

Our test system consisted of two HP DL380 systems equipped with Intel E5-2620 v3 CPUs and 128 GB of memory. While you can order the system with all 1 GbE networking, HPE recommends using 10 GbE for best performance.

It’s worth pointing out here that VMware requires a minimum of three hosts to construct a minimal VSAN cluster. Some deployment scenarios, such as remote office applications, can be configured as a two-node system with an external system (possibly remote) as the witness.

StoreVirtual scales up to a total of 32 hosts should you need that big of a cluster. VSAN 6.2 now scales up to sixty-four hosts, giving it the edge on expandability.

Disk configurations vary depending on your application. HPE recommends implementing one full block consisting of eight drives at a time.

Each DL 380 will support up to three blocks or a total of twenty-four drives. These can be any combination of HDD or SSD drives to include all HDD or all SSD.

All storage is managed by the StoreVirtual Appliance software and is fully integrated with VMware vSphere. The nice thing about using a commodity server like the DL 380 as the building block is the flexibility it brings.

Setup and configuration is greatly simplified with the OneView InstantOn (OVIO) tool. The foundation of this tool is used for both the HC 250 running Microsoft’s Cloud Platform System and the HC 380 we tested running VMware vSphere.

Configuring multiple network addresses and individual settings for each node in a large cluster can be tedious and error prone (see Figure 1). HPE’s OVIO takes all the information needed through a simple dialog process and then does everything for you. 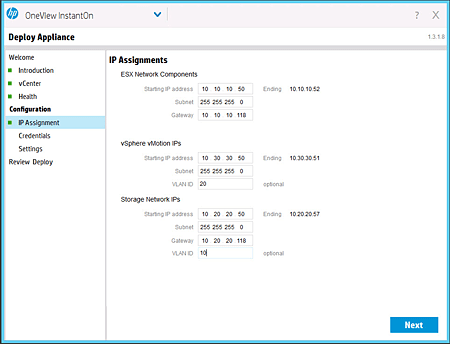 HPE offers a simulator-only version of the OneView InstantOn tool for instructional purposes. This tool works just like the real tool with the exception of actually installing or modifying any hardware configurations.

It’s useful for walking through the various menus to help identify any information required for a successful installation. In fact, it’s a great way to identify all the IP addresses and system information you’ll need to complete the process.

Figure 2 shows the summary page listing the configuration details prior to deployment.

Multiple avenues exist for managing the HC 380 system. An overall dashboard as shown in Figure 3 presents a summary of the system with quick links to tasks such as back and restore and software updates. Other tabs on the left side show Virtual Machines, system Activity and Utilization. The web-based management interface provides quick access to many functions that would typically take a number of clicks in the vCenter.

HP OneView for VMware vCenter version 7.8.2 provides a connection to a number of management tools specific to the management of the HC 380.

Figure 4 shows the menu that presents when you right-click on the cluster. The All HP Management Actions entry provides links to create a Datastore, VM from Template and deploy the HP StoreOnce management console or an additional VSA instance. All other vSphere actions, including creating, deleting, moving and cloning VMs, function just as you would expect against the VSA-based datastore.

The HPE HC 380 builds upon the foundation of the venerable DL 380 system to deliver hyper-converged features with simplified installation and management.

HPE’s OVIO takes the complexity out of cluster installation and makes it cookie-cutter simple. HPE’s StoreVirtual Appliance brings redundant, multi-node storage at a cost below what you would pay for a similar VSAN installation.

Pricing remains in the “call for availability” category, but the product is listedon their website.