While the term “software defined” appears in the product pages of many enterprise IT vendors, it doesn’t always mean the same thing. HPE adopted the phrase “composable infrastructure” to describe their Synergy platform, which is an evolution of their blade system line of products. The secret sauce of composability is also software-based and consists in the form of HPE OneView.

HPE announced version 4.1 of HPE OneView at their Discover event this summer in Las Vegas. 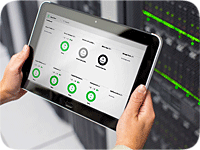 This release brought a number of new capabilities and expanded support for popular orchestration frameworks like Chef and Puppet.

The big win for HPE OneView and HPE Synergy is the ability to configure and implement the infrastructure required to support today’s complicated applications in a fraction of the time required with older hardware. HPE Synergy provides the hardware resources, and HPE OneView connects everything together.

For the purpose of this review we were invited to HPE’s Houston offices to go hands-on with the latest version of HPE OneView and a multi-frame HPE Synergy deployment. This allowed us to exercise the software with real hardware and made the evaluation much more realistic.

Tracking and managing the status of a large datacenter has traditionally required a team of administrators. HPE OneView makes it possible to accomplish this task with minimal staffing. Figure 1 shows a log of system alerts with detailed information and the ability to take direct action with just a few mouse clicks. 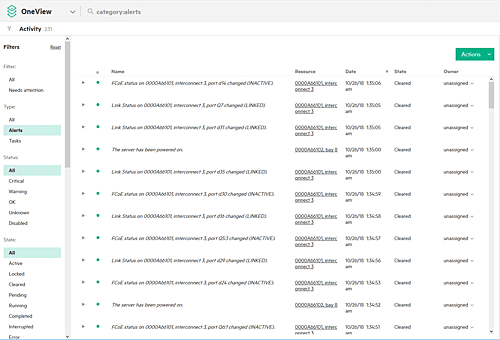 Figure 2 shows a graphical dashboard depicting the status of a large physical deployment consisting of three enclosures, twenty-one physical servers, and eighteen network interconnects. Administrators can quickly see any potential issues through the use of color coding, showing warnings in yellow and critical errors in red. If necessary, an operation can drill down to see individual enclosures to determine specific hardware components needing attention (see Figure 3). 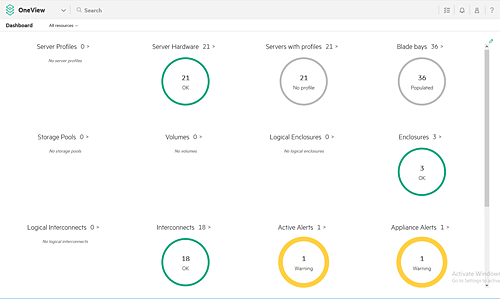 One key advantage of the Synergy platform is that HPE OneView comes embedded with the system. HPE Synergy Composer is the hardware component powered by HPE OneView for managing all aspects of the Synergy platform. The latest release of HPE OneView supports industry standard cryptography in the form of FIPS 140-2 and the most recent updates to Transport Layer Security (TLS), plus the ability to switch off older versions using the REST interface. One of the most challenging aspects for any large infrastructure is in the managing of hardware (firmware) and software updates. With HPE Synergy, all updates are handled seamlessly by HPE OneView and orchestrated to minimize the impact to production systems. This includes mitigations for the latest Intel Spectre and Meltdown vulnerabilities. It’s also worth noting here that the HPE OneView virtual appliance is not vulnerable to these attacks, as HPE does not allow the execution of any user code on the appliance.

Templates help build the foundation for providing the infrastructure needed to deploy specific types of applications. Figure 4 shows a Server Profile template for a typical ESXi instance. The key here is the abstract nature of a profile, meaning it is not tied to a specific server. This type of template would then be used when an ESXi host is required to deploy multiple virtual machines along with a storage template (see Figure 5) and networking. The concept of devops is where the line between developers and operations join together to streamline the development and deployment process. This has become even more necessary with the advent of micro services and the infrastructure requirements created by today’s application architectures.

HPE OneView fully supports the most popular orchestration open source tools such as Chef and Puppet and maintains one github site containing a large number of Chef recipes plus another for Puppet.

Microsoft’s PowerShell scripting tool, now available on both Windows and Linux platforms, continues to be the administrator’s tool of choice for automating operating system tasks. Any task you must perform more than once is worth writing a script to make it happen.

HPE provides a OneView PowerShell plugin to automate a wide range of functions. This plugin takes advantage of a form-based helper tool to build commands. Figure 6 shows the helper function for the command New-HPOVNetwork with the required and optional parameters displayed.

While the goal of HPE OneView is to simplify the life of a datacenter administrator, it still can be a complicated and daunting task for anyone new to the product. Fortunately HPE provides a wealth of resources along with a free trial download to help get you up to speed.