If you’ve been around the computer industry for any length of time, you’ve probably heard the name Supermicro. They’ve been in business for over twenty years and provide systems to a wide variety of customers.

Servers are where Supermicro started, and the new 1U SYS-5018D-MTLN4F represents the company well. Our review unit came with an Intel Xeon E3-1270 CPU and 32 GB of RAM. This unit matches up fairly well with the HP DL320e we recently reviewed.

Supermicro has expanded its product line over the years from server motherboards to systems of all shapes and sizes. The company’s lineup now includes everything from small embedded systems to large-scale blades, a high-density MicroCloud and Xeon Phi-based SuperServers.

Supermicro has networking, storage and workstation products as well. The company also has a number of customers that take its products, add software and then repackage them as some type of hardware appliance.

One feature that jumps right out when you look at the rear panel of the SYS-5018D-MTLN4F is the abundance of Ethernet ports. A total of four GbE ports are available to the operating system along with an additional GbE port for the management interface.

The rear panel also includes two USB 2.0 and two USB 3.0 ports, plus connectors for a VGA monitor and a serial port. One minor complaint on the rear panel is the close proximity of the lower two Ethernet connectors to the case, making it difficult to remove the cable without using some sort of tool.

Our review model came with two PCI connectors for expansion capabilities, although you’ll need a riser card to flip the cards sideways. That effectively reduces the number of boards to a single PCIe 3.0 X8/16 or PCIe 2.0 X2.

Internally, you’ll find four SATA 3.0 (6 Gb/s) ports, which provide direct connections for the four SATA drive bays, and two SATA 2.0 (3 Gb/s) ports for an optional slim DVD and a Disk-On-Module (DOM) should that be needed. An additional USB 3.0 port on the motherboard makes it possible to install a USB disk for booting into a system like VMware’s ESXi.

The AMI BIOS provides full support for UEFI boot devices and offers software support for RAID 0, 1, 5 and 10. It’s also worth pointing out at this point that RAID is not required for any disks in the system, making it possible to use them with Microsoft’s Storage Spaces or VMware’s VSAN.

Out-of-band management is provided over a separate Ethernet port. Supermicro supports IPMI 2.0 as well as their own implementation of a Base Management Controller (BMC) via this port. Figure 1 shows a page from the web-based management console. 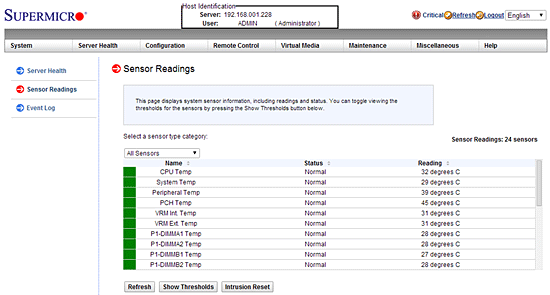 Supermicro also offers a program called IPMIView, which is a Java-based management tool. The zip file provides versions for Linux, Windows and a pure Java implementation. With IPMIView you can easily control multiple systems from a single console.

You can also open multiple sessions at the same time using a tab-based interface. This makes it easy to quickly monitor the health of multiple systems from a single application.

Remote control is possible using a Java-based applet that can be launched from either the Remote Control tab on the management page or from the IPMIView application. A virtual media feature of the remote control app connects either an image file or a local resource such as a DVD drive to the remote computer.

This makes it possible to remotely install or restore an operating system without ever having to touch the physical machine. The remote control application provides additional features such as keyboard mapping, video recording and full control over chassis power.

A Dynamic DNS tab makes it possible to configure a system to update a domain name with an external IP address to make the BMC remote management available over the Internet. Be aware that this capability could leave a system open to an attack.

The retail cost of the Supermicro unit as tested comes in at $1,290 for single-unit quantities, which is not a bad price considering the server-grade CPU and memory. A similarly configured HP DL320e would cost $2,271.

That’s a pretty big difference for roughly the same capabilities. The HP DL 320e does seem to have sturdier construction, and the HP iLO management software definitely has more features than the Supermicro BMC.

In the end, it’s up to you to decide if the feature differences are worth the money.