Workgroup and small business storage products arbe a dime a dozen these days, and choosing a particular product often comes down more to cost than anything else.

One exception to this rule, though, would be the requirement to seamlessly integrate into a Microsoft environment where Active Directory is used to control access to all resources. In this case, you would need a product with Active Directory integration or one based on Windows Server.

With the core pieces of Windows Server 2012 R2 underneath all of these products it’s expected they integrate well into a Microsoft Active Directory environment.

Buffalo Technology’s TeraStation 5400r is a 1U rack mount device that’s able to accommodate up to 16 TB of storage. It runs Windows Storage Server 2012 R2 Standard Edition on an Intel Atom D2700 processor with 5 GB of memory.

The device includes three USB 3.0 and two USB 2.0 ports for connecting external devices, and it has one power supply, which could present a single-point-of-failure problem if you’re looking for a highly reliable storage box.

We also tested the Buffalo Technology TeraStation 5600 WSS, which has basically the same foundation as the 5400r but with six drive bays in a tower configuration, for a total of up to 24 TB of storage using 4 TB drives. 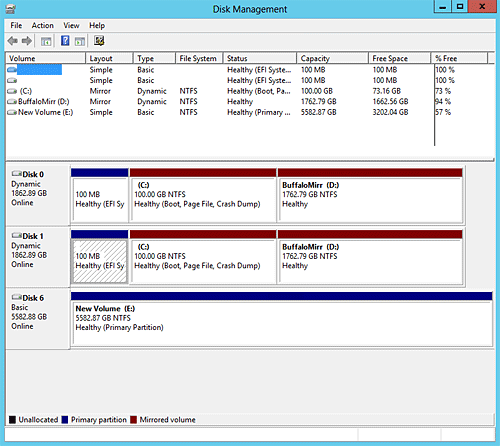 Western Digital provided us with a Sentinel DS5100, which comes with an Intel Xeon E3-1220L processor and 8 GB of memory. It runs Microsoft Windows Server 2012 R2 Essentials, which has a number of additional features over Windows Storage Server.

Both Buffalo Technology products come with Windows Storage Server 2012 R2 Standard edition. This OEM-only version of Windows Server looks just like a standard version of the OS with a few limitations. Microsoft has a handy chart available from their download site with comparisons of all Windows Server versions. Buffalo Technology also sells lower-end versions of the TeraStation line that come with Windows Storage Server 2012 R2 Workgroup Edition. 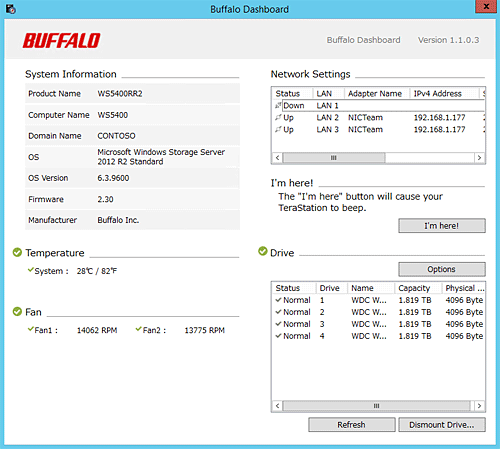 Both Buffalo devices come with the Buffalo Dashboard (see Figure 2), which provides a single screen to monitor and manage disks, networking, temperature and fan status. You also have the standard Windows Server Manager tool and the ability to add roles and features although you won’t be able to install some of these due to the limitations of this version.

The Western Digital unit comes with Windows Server 2012 R2 Essentials, which includes things like a domain controller and the ability to configure remote access using the Direct Access feature. In contrast to the Buffalo units, the Western Digital has both the CPU and memory to handle the additional features and then some. Both the Buffalo Technology devices perform well in the storage role, although you probably won’t want to add any additional roles and features due to the processor and memory. While you could add the Hyper-V role and run one VM, it really isn’t practical in this case.

We had no issues accessing files on either of the shares and found the performance consistent with other storage systems over a 1 GB link.

The Western Digital unit handled both the Windows Server 2012 R2 Essentials roles along with serving up data with ease. We found the file server to be slightly more responsive than the Buffalo devices in copying large files between a client PC and the file share.

All three of these systems integrate smoothly with an existing Active Directory environment or, in the case of the Western Digital unit, come with one already installed. Costs vary depending on the amount of storage, but you’ll pay more for the extra capabilities of the WD unit than either of the Buffalo Technology devices.