The server market in 2019 is in a state of transition as new workloads and use-cases push vendors and their technology into different directions. It’s a transition that is also leading the global server market to new growth, as both enterprises and cloud vendors continue to acquire new hardware.

Clearly, the SSD is the dominant medium. The SSD vs. HDD debate has largely been settled; the falling price of SSD means it will certainly replace the HDD, though not overnight. Companies shopping for an SSD array have plenty of great choices.

While x86 and Intel have long dominated the server market, that dominance is no longer a foregone conclusion, as different requirements and buying patterns are shifting the landscape. Intel’s x86 dominance is facing increasing challenges from AMD, while x86 overall is facing new pressure from ARM technology in the data center market.

The move toward cloud storage has had an impact on server consumption as has the growth of so-called hyper-scalers, used by larger organizations that do things on a scale much larger than a typical enterprise. Even with all the changes, the overall trend for the global server market looks to be trend upward in a robust fashion, as growth continues almost unabated.

The leading research firms, IDC and Gartner, often differ in their reports on the global server market and the total amount of revenue generated and servers shipped.

Regardless of which analyst firms market numbers are used, when it comes to market share, there is a clear winner. Dell tops both the IDC and Gartner lists in terms of both revenue and unit shipments.

Coming in second is Hewlett Packard Enterprise (HPE), on both analyst firm lists. 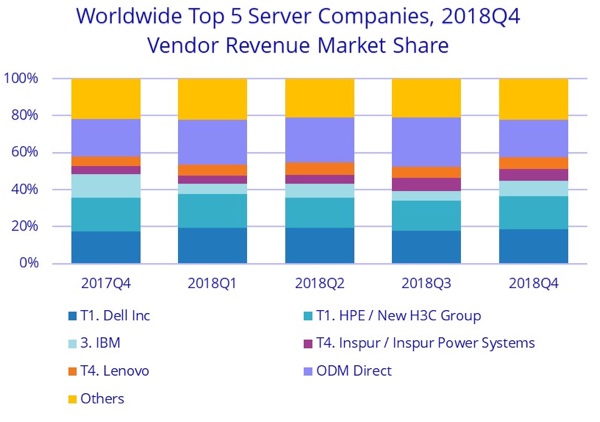 The server market has been relatively stable over the last year, with the established leaders holding their respective places. Source: IDC

While x86 is growing, other CPU architectures are not, at least in terms of global market share by revenue. According to IDC, non-x86 servers, which include RISC based systems such as IBM Power and Oracle’s SPARC, as well as ARM-based servers, generated $2.5 billion in revenue during the last quarter of 2018 for a 21.6 percent year-over-year decline.

Within x86, Intel is the largest vendor, though it has come under increasing pressure from AMD in recent years.

In 2019, Intel has advanced its server CPU lineup with its second generation Xeon Scalable processors, codenamed Cascade Lake. The new Xeon Scalable processors were announced in April 2019 and are making their way into x86 servers from multiple vendors during the second quarter of 2019. Cascade Lake is built on a 14nm process, which defines the compute density that can fit into a piece of silicon.

The top end server CPU from Intel in the Cascade Lake family is the Xeon Scalable Platinum 9200 processors, that can have up to 56 cores and 12 memory channels.

While Intel is still shipping 14nm based CPU, AMD had been busy in 2019 talking up it 10nm and 7nm process cores for servers. The AMD EPYC is a 10nm CPU, while the new EPYC 2, codenamed “Rome” is built on a 7nm process.

Multiple vendors in 2019, including Dell and HPE have announced that they will provide servers with AMD EPYC processors as a competitive alternative to Intel based x86 systems. The promise made by AMD and its backers is that EPYC provides more compute power per dollar, than its’ primary rival, while still offering a stable, reliable CPU.

While still a nascent category in server space, ARM-based servers could be an emerging tend in 2019. ARM dominates in the embedded and mobile space, but adoption in enterprise servers and data centers has been very limited.

In 2019, public cloud giant Amazon Web Services (AWS) is among those that are pushing the use of ARM-based servers. AWS built its own custom ARM server chip called the Graviton, which is currently available as an optional CPU architecture in EC2 (elastic compute cloud).