Oracle released several new x86 servers over the last few weeks, proving that it continues to invest in the abundant x86 intellectual property it inherited from Sun Microsystems. What’s most interesting, though, is that Oracle appears to be positioning these assets as being the best destination for those running Oracle Solaris, Oracle Linux, Oracle VM and the company’s various enterprise applications and databases.

To look at it another way, Sun x86 servers no longer appear to be being used to compete as mere hardware against the likes of HP, IBM and Dell. Instead, the company seems to be using them as a way to bundle a complete system of hardware and software that is optimized for Oracle apps.

“With the current trend of bundling converged solutions, it makes sense for Oracle to tie their products and components into solution sets,” said Greg Schulz, an analyst at Storage and Server IO Group. “Since all of the vendors are leveraging Intel as well as AMD-based processors as part of their products, the differentiator is how they combine the various components to create various soft product solution sets.” 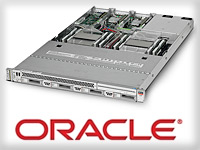 The servers themselves, of course, utilize the latest Intel Xeon E5 processors — a necessity given that every other server hardware vendor has embraced them and already released their own E5 models. That Oracle is one of the last to announce their lineup is a sign of the times.

Still, the company is smart enough to know that you can’t compete at all unless you are up to speed. Accordingly, it has released some impressive Oracle Benchmarks that make it clear that the new Sun x86 servers are no slouches. This includes records on tests such as SPEC CPU2006, SPECjEnterprise2010 and Oracle E-Business Suite R12.1.3.

Alasti claims these new models deliver up to 87 percent better computational performance and feature increased memory and network bandwidth compared to the previous generation. As well as their performance capabilities on Oracle apps, Alasti emphasizes that they come with tools needed for cloud deployments, including operating system, virtualization, infrastructure provisioning and system management. These advantages are free for those using Oracle Premier Support.

Let’s take a closer look at the servers themselves.

The X4170 M3 is a 1U rack intended for middleware workloads, enterprise business applications, system administration and application development. Based on the Xeon E5-2600 product family (up to eight cores per processor), the X4170 MS comes in three chassis configurations with up to eight disk bays, up to 12 TB of disk storage or 2.4 TB of flash storage, and four PCIe 3.0 expansion slots. Further, it has up to 512 GB of memory and four 10 GbE ports.

The 2U X4270 M3 is aimed at more demanding clustered databases and virtualized business applications. It offers up to 37.2 TB of data storage or 7.8 TB of flash storage, four 10 GbE ports and up to 256 GB of memory. Oracle claims an 80 percent bump in speed compared to the previous edition.

Oracle has also introduced a new blade that packs plenty of punch. This new blade server leverages the power cooling and I/O infrastructure of the Sun Blade 6000 chassis. It includes two Xeon E5-2600s and up to 384 GB of RAM.

Along with the first three x86 servers, Oracle has released two NEBS Level-3 certified Netra x86 M3 servers for communications, military or other harsh environments that require the highest levels of reliability. Like the above models, they are faster than their predecessors (up to 2.5 times faster). Solaris, Oracle VM, Oracle Linux and Oracle Enterprise Manager Ops Center are all built in.