Kicking the Tires on Windows 8 Server

Using the Developer preview release of Windows 8 Server for a month has been a surprisingly crash-free experience. Microsoft has put a huge amount of effort into delivering a rock-solid release that’s technically not even beta yet. It’s also given us some time to focus on a number of areas in which Microsoft has invested heavily in terms of redesign and re-engineering.

It’s easy to spot one of the central themes of Microsoft’s Windows Server 8 as you boot up the Developer Preview for the first time. In fact, the whole concept of development themes is one you see evidenced in many different places. Windows Server 8 attempts to reduce the pain experienced by system administrators by streamlining ans automating as many of the tasks as possible. Other themes include seamless cloud integration, support for a modern and often remote workforce, and simplifying the process of managing and administering multiple identities.

Many behind-the-scenes moving parts are required to implement these key themes. At a Windows Server 8 reviewer’s event held prior to the Build conference, Jeffrey Snover made it a point to identify the fact that many of the core pieces in Windows Server 8 are reaching version 3. This would include Windows Powershell which plays a major role in the automation of administration tasks. PowerShell V3 includes over 2300 cmdlets in support of the new server manager app and the various management tools. Hyper-V is another key piece of the Windows Server 8 puzzle that has reached version 3.

Another obvious theme for Windows Server 8 with deep structural implications is cloud integration. A key point here is Microsoft’s recognition of the need to connect to any cloud, not just its Azure offering. At the same reviewer’s event, Bill Laing stated that Microsoft wants to bring every app available on the platform to any cloud. He also mentioned the theme of self-service as something Microsoft has sought to keep in mind in as many places as possible.

The user interface for server manager is built on top of Windows Presentation Foundation (WPF) and has been treated to a well-thought-out redesign (see Figure 1). 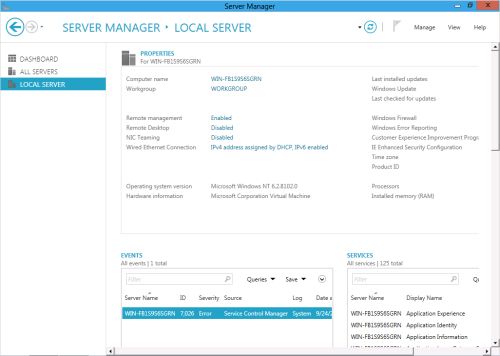 Some of the words used to describe the design themes include making information “glanceable” and “actionable.” For example, when you choose a particular function in the left-hand tree view, it collapses to provide more screen real estate for other task-specific information. When you hover over the “Tasks” label (see Figure 2), you’ll see a pop-up drop-down list of context-specific available options. 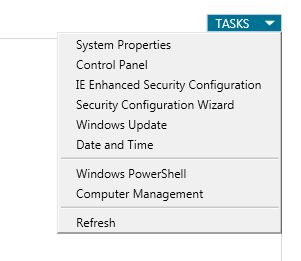 Much thought also went into things like mouse movement required for repetitive tasks and visual cues to make it easier to identify the status of a specific function. The new dashboard is fully customizable and has many of these design goals baked in (see Figure 3). All “wizards” have been reworked with an eye toward presenting meaningful information to help an administrator configure a particular feature right the first time. Special attention has been paid to error checking and giving useful messages when either a problem has been identified or some additional steps are required. 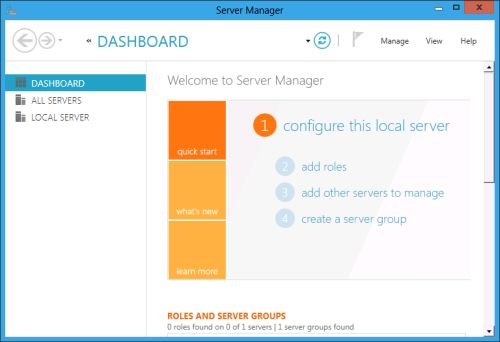 Adding new roles or features now uses two different approaches (see Figure 4). The first is similar to Windows Server 2008 R2, providing role-based or feature-based installation. Scenario-based installation is the new approach, and it will lead you through a complex scenario such as a multi-server remote terminal services deployment. That’s the only scenario supported in the developer release, but you can expect more in future releases. The Power Is in PowerShell

It’s pretty safe to say that virtually every administrative task in Windows Server 8 has PowerShell support. This has far-reaching implications both from the perspective of simplification and a more global approach to management. Microsoft has gone to great lengths to utilize and implement standards-based management wherever possible, including things like using WS-MAN and WBEM.

It has also brought concepts such as workflow into the world of administrative tasks. This makes it possible to automate multi-step processes requiring sequential execution and continuation based on previous results. New PowerShell support here includes rich control semantics like Suspend and Resume. New cmdlets, such as Invoke-WebRequest and Invoke-Command, make it easier to connect with other servers over the web.

There’s a new console for viewing PowerShell commands executed to manage Active Directory. It comes with the ability to view the history and save a copy if you so desire. It’s safe to say that PowerShell is now the ubiquitous engine behind essentially every management task in Windows Server 8. If you haven’t taken the time to learn the basics of PowerShell, you will want to do so in the near future.

This is really just the tip of the iceberg with Windows Server 8. There are many more features that we’ll be taking a look at in the future. The developer preview is really a solid release, so if you haven’t downloaded it yet, why not?