HP’s DL180 Gets the Gen9 Treatment

HP has been gradually upgrading its server models to Gen9, and the DL180 value server is the latest to join that list. This budget-conscious model has a number of the same features found in the higher end DL380 we previously reviewed.

Our DL180 server review unit came equipped with an Intel E5-2609 v3 CPU, 64 GB of memory and four 300 GB 15K SAS disks. Also standard are two GB Ethernet ports with an optional third port for management. Our system did not come with a separate iLO port, and instead shares one of the other two ports.

The base DL 180 comes with an HP Dynamic Smart Array B140i disk controller although our demo machine also had an HP Smart HBA H240. This controller has an HBA mode which fully supports Microsoft’s Storage Spaces. Expansion ports include four USB 3.0 ports, one USB 2.0 and one Micro SD slot. The Micro SD slot is perfect for installing VMware’s ESXi hypervisor leaving all the removable disk slots available as local storage.

One of the highlighted features of the Gen9 systems is Intelligent Provisioning. This BIOS tool provides a wizard-driven method to provision a new operating system with all the appropriate drivers to match the server hardware. Our demo unit did not ship with the latest version of Intelligent Provisioning, so we had to download the update from the HP support site and install it manually.

If you’ve ever watched a server boot up waiting to hit just the right key combination to get into the disk controller BIOS, you’ll appreciate HP’s easy-to-use configuration process. During the boot process you have a number of function keys available (see Figure 1) such as F9 to launch the System Utilities, F10 for Intelligent Provisioning and F11 for the Boot Menu. The System Utilities option includes most everything you would need to do to get the system configured, including a link to the HP Smart Storage Administrator. HPSSA provides a convenient way to both configure and diagnose your storage. Figure 2 shows the Smart HBA H240 as the selected controller and the configuration screen with options to modify.

The controller is currently set to HBA mode but can be switched to RAID mode by clicking the Enable RAID Mode label. The left-hand pane also shows the six physical drives attached to the controller. 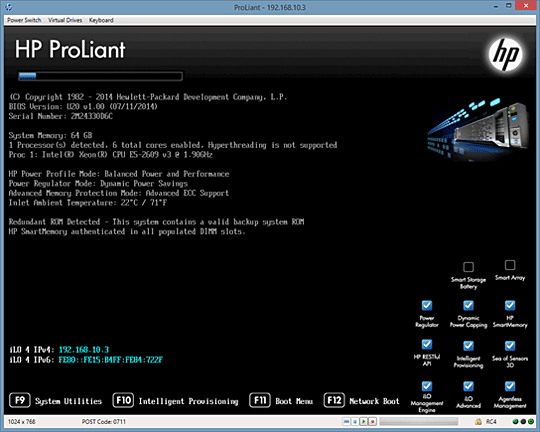 HP ships all Gen9 systems with iLO version 4. This latest version of HP’s built-in management tool uses a dedicated Ethernet port or it will share one of the two on-board ports.

The basic iLO feature set does not include the ability to run a remote console once the system has finished booting. That makes it pretty difficult to accomplish a remote operating system install unless of course you use the Intelligent Provisioning method.

Another new feature with the Gen9 systems is the inclusion of a RESTful interface to the HP iLO management engine. HP OneView is the newest management offering from the company, and it has a REST API interface as well.

You can examine the RESTful interface using a web browser by using the IP address for the iLO followed by /rest/v1. The output will look something like this:

The HP DL180 may be just what you need if you’re looking for a budget-priced two-socket server.