Innovation in the commodity server game is no easy feat. New generations of servers tend to have incremental feature updates to go with the latest processor chips.

And when it comes to total cost, calculating the figures involved in running a datacenter typically shows that long-term operating and maintenance expenses far outweigh the initial purchase price. The quickest way to lower operating costs is to reduce the number of servers. As a result, server consolidation continues to be high on the priority list for most IT administrators.

With virtualization firmly established as the primary consolidation tool, the game has changed to maximizing processing power and memory density. While the promise of virtual desktop infrastructure (VDI) nirvana has never really fully materialized, it is seeing more interest as technologies like USB redirection and video fidelity steadily improve. For a server to meet the graphic demands of VDI it needs as many GPU cards as possible.

The introduction of the HP ProLiant DL580 Gen8 represents the company’s latest effort to meet these demands while also helping to lower long-term costs. We were given the opportunity to get our hands on a beta system prior to official product launch so we could take the DL580 Gen8 through its paces.

Power and cooling are without question the two most significant operating costs for servers. While reducing the number of servers can help, it won’t make any difference if you simply trade two boxes for one that has the same power and cooling requirements as the previous two.

Comparing the HP ProLiant DL580 Gen8 to an older DL385 G7 shows significant power gains for the latest generation. Over a 24-hour period the DL385 G7 averaged 183 Watts while the DL580 Gen8 came in around 280 Watts.

The older DL385 G7 has two 16-core AMD processors versus the four Intel Xeon processors and 128GB of memory versus 256GB. The bottom line here is you could take all the workloads from three of the older DL385 G7 and run them on a single DL 580 Gen8 with room to spare.

HP has always been a company of engineering excellence, and it definitely shows when you look at the ProLiant DL580 Gen 8’s specs. It’s obvious when you open the box and look inside as well.

The HP ProLiant DL580 Gen 8 has processing power covered in spades. Four sockets house the latest Intel multi-core CPUs, specifically the Xeon E7-8800/4800v2 family of processors. Our beta system came equipped with four 2.80 GHz E7-4890 v2 15-core processors installed. At launch the system will be able to support 3 TB of memory and up to 6 TB later in the year using 64GB DIMMs.

The HP ProLiant DL580 Gen8 comes with HP’s integrated Lights Out (iLO) 4 for out-of-band management. A dedicated GbE Ethernet port provides connectivity over a network separate from normal data traffic. Figure 1 shows the boot screen using the iLO remote console feature. As long as you have connectivity to the management port you can fully control the system to include powering on and off. Our test system came with two 279GB SAS drives configured in a RAID 1 mirror. That’s not exactly an overwhelming amount of disk space for a powerful system like this, but it does provide a redundant boot drive. We did run into a bump when attempting to use the Intelligent Provisioning option. One step in the process will check for system updates prior to installing the operating system. Our system would get hung up at this point unless we selected Skip Update (see Figure 2). We’re hoping this was due to the beta status of our system and will have been rectified by ship time. With the Skip Update option we were able to successfully install Windows Server 2012 R2 Datacenter without any further problems. Figure 3 shows the dashboard page of Windows Server Manager after installation. 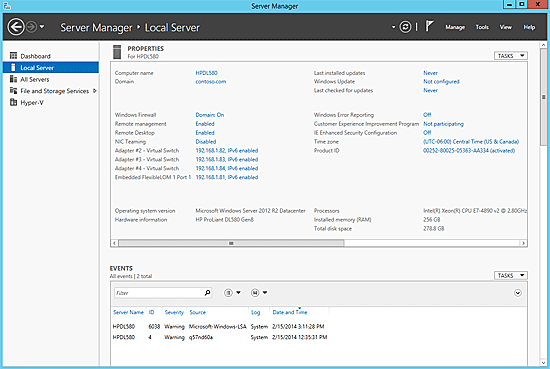 We installed the Hyper-V role and loaded up a number of virtual machines to get an idea of how they performed. Microsoft offers a number of demo VHD files with different System Center 2012 R2 modules pre-configured. We used the System Center Virtual Machine Manager and System Center App Controller to simulate typical workloads and found them highly responsive.

We used Windows PowerShell to create thirty virtual machines with 8 GB of memory each and then to launch each one. Figure 4 shows the out-of-memory message and the amount of CPU currently in use (2%). In this scenario the system ran out of memory resources with very little drain on the available CPU. While this certainly isn’t a stretch of this system, it does give some indication of the amount of horsepower available. 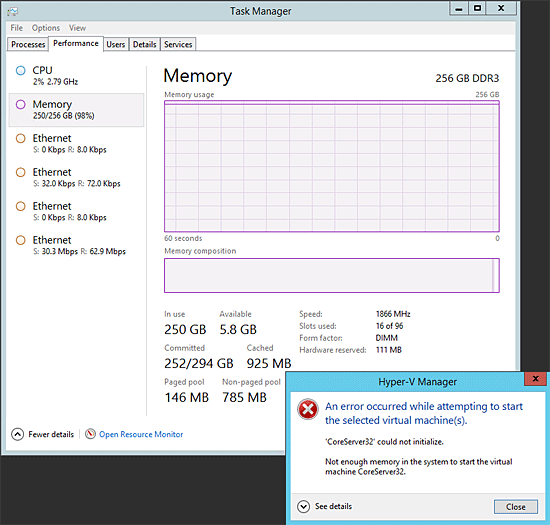 Operating costs vary widely by region of the country or world, but the more you pay for heating and cooling the more you’ll save by upgrading to a new system like the DL 580 Gen8. It’s definitely worth a look as a cost-efficient addition to most any datacenter environment.