If you follow my writing you know I have been a proponent of Diskeeper since its early days. It was the first certified utility for Windows 2000, but there were numerous problems when version 6.0 originally shipped. They were random (not easily reproducible) bugs, which is a software developer’s worst nightmare. My personal experience with the initial edition caused me to remove it from the system. However the timely release of Second Edition is to be applauded. Not only did Executive Software fix the problems, they actually sped up the de-fragmentation process even more. Also improved is the boot-time-defragmenter which had been slow. It now works in about half the time of the 5.0 version. The Second Edition upgrade of Diskeeper is free to anyone who has purchased the earlier Diskeeper 6.0 version.

For those of you who are not aware, the Microsoft Defragmenter in Windows 2000 is based on the Diskeeper Engine, but it is an older, less feature-rich version
(click for the differences). Microsoft says in a
white paper discussing their Defragmenter:

“File fragmentation can negatively affect operating system speed and performance. To maintain peak performance when using Windows 2000, the condition of your disks should be analyzed on a regular basis-preferably once a week for moderate-to-heavy use; less frequently for intermittent use-and defragmentation performed as needed.

Disk Defragmenter is designed primarily for stand-alone machines and users with Administrator privileges. It is not intended to be used for network defragmentation. Administrators who require network controls, automatic scheduling, and the capability to simultaneously defragment multiple partitions, and MFT and paging files, should consider upgrading to a third-party, networkable
defragmenter.“

After the experience of 6.0 bringing my system to it knees (no data loss just intense CPU utilization), I wanted to make very sure the Second Edition was rock solid before recommending it to anyone. I have it installed on 2 Microsoft BackOffice SmallBusinessServer networks (1 SBS-W2K & 1 SBS-4.5) as well as a few standalone systems. It has been flawless over the last 45 days since installation. I have been using the Set It and Forget It option to have the systems maintained to prevent the buildup of fragmentation. Running at the lowest priority setting I have not had a complaint from a single user about the network being slow. Keep in mind these servers are running the whole BackOffice Suite on one box so they are already overworked. There are 5 different settings for priority, so you can tune your results for the automated de-fragmentation. There’s another set of 5 priorities for tuning manual de-fragmentation.

As I maintain these 2 test beds over the wire I find it very useful to be able to set up and check on all the workstations from the Diskeeper Server Console.

New in this version is the “Smart Scheduling” option which, when enabled, allows the Diskeeper Engine to monitor fragmentation on the drives and schedule itself accordingly. It will run as necessary from every hour to only once a week. Of course you can manually set it to run at specified periods if you are a control freak. There are plenty of options: Once, Continuously, 2, 4, 6, 8, 12, 24, 48 or 72 Hours.

Here is a screenshot of the Network Scheduler; of course, if you have the WorkStation version you won’t see this. It’s only included in the Server version. If you are already running Diskeeper 6.0 and not having any problems I would still recommend downloading the Second Edition Free Upgrade from
http://www.executive.com/downloads/menu.asp. This upgrade requires that 6.0 is currently installed on the system. So, if like me you had problems and un-installed it, they will allow you to download the full product upon proof of purchase. If you have a slow connection I am sure they would send you out a new CD, although you may have to pay shipping. I called and they gave me a temporary URL to download the full product with no hassle once they found my registration in their database.

If you are interested in the effects of fragmentation on your system, there is a good white paper on the Microsoft TechNet Site at
http://www.microsoft.com/windows2000/techinfo/administration/fileandprint/defrag.asp

If you would like to see some test results, Executive has links to some NSTL tests at
http://www.execsoft.com/whats-new/benchmarks.asp

Here is a screenshot of Diskeeper 6.0 Second Edition in action 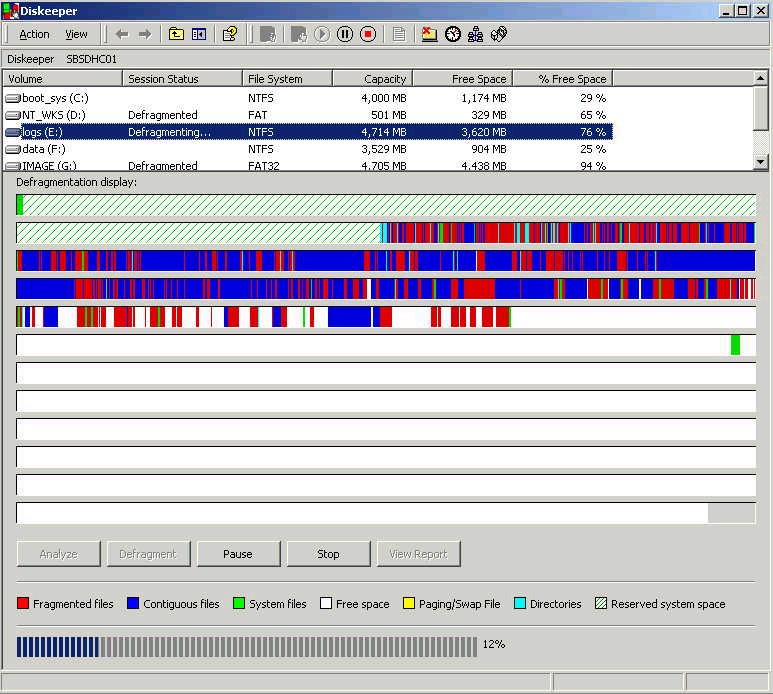 And what it looks like when it finishes (not every run comes out this
perfect, but this is an actual run) I am happy to be able to once again whole-heartedly recommend Diskeeper for all your PCs and networks. Trademarks, Copyrights and Brand Names are property of their respective owners
Author and/or Publisher assumes no responsibility,
use these suggestions and guidelines at your own risk

If you follow Andy Goodman’s writing you know he’s been a proponent of Diskeeper since its early days. Unfortunately, there were numerous problems when version 6.0 originally shipped. However, not only has Executive Software fixed the problems with the timely release of a Second Edition, they’ve actually sped up the de-fragmentation process even more.

The following chart reprinted with permission of Executive Software

Trademarks, Copyrights and Brand Names are property of their respective owners
Author and/or Publisher assumes no responsibility, use these suggestions and guidelines at
your own risk


This article was originally published on Aug 2, 2001

Thanks for your registration, follow us on our social networks to keep up-to-date