While
Windows 2000 Server install IIS by default on a clean installation,
Windows 2000 Professional only installs IIS (now called Internet
Information Services in Professional as well) if Peer Web Services was
previously installed on the machine (meaning an upgrade from 95, 98 or
NT running PWS). However, if it was not installed by default, you can
add it by using the Windows Components Wizard via Add/Remove Programs in
Control Panel (incidentally, this is now where all Windows components
are added, different from NT 4). Of course, you will need TCP/IP
installed on the system prior to installing IIS. The tool to manage IIS
is still called Internet Services Management (ISM), and is still an MMC
snap-in. Installing IIS will create a directory called Inetpub, under
which you will find the associated storage directories for the given
services.  Examples of the
services installed include a default Website (wwwroot), default FTP site
(ftproot), and virtual SMTP server (mailroot). Components can be
included or excluded as you see fit. You can also control the properties
of each and create new virtual sites as you would in IIS. To control
Master properties, or those that will be inherited by all sites, go to
the properties of the computername in ISM, and choose to edit a service
(like WWW Service), as shown below: 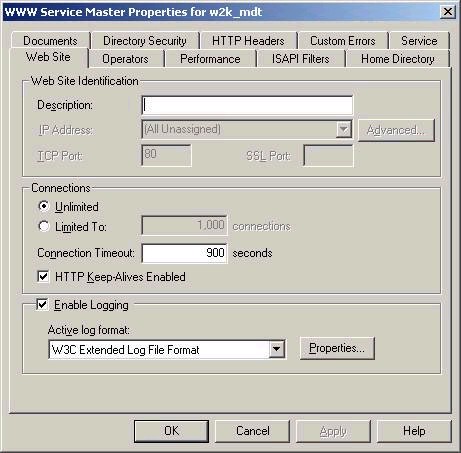 Before getting into the bigger details, know that Windows 2000 supports
the FAT, FAT32 and NTFS file systems. You can convert FAT or FAT32 to
NTFS using the Convert.exe program. There is no utility provided
to convert NTFS to either FAT or FAT32.

Disks Management is an area that has changed significantly from NT 4. First of all, there are now two types of hard disk storage configuration – Basic and Dynamic. The two differ in capabilities as well as terminology, so it is important to keep things straight. A Basic disk is the traditional disk type from NT 4 (as well as 95, 98, etc). A Basic disk is divided into partitions (3 primary + 1 extended containing logicals, or 4 primaries maximum), and can be accessed by other operating systems, using the information stored in the master boot record (MBR). In Windows 2000, a Basic disk can contain existing RAID 0, 1, or 5 sets created in NT 4 (or previous versions) as well as volumes sets. However, none of these can be newly created under Windows 2000 if you are using Basic disks – they may only exist if the system has been upgraded from NT (you can however repair a failed RAID set, even on a Basic disk).

A Dynamic disk is a new type of disk under Windows 2000. It does not use
partitions, but instead volumes, and does not have a maximum number of
volumes per disk. Volumes on dynamic disks can be extended on the fly,
as well as support new instances of RAID 0, 1, or 5 that you might
configure. In order to use Dynamic disks, you must first convert
existing Basic disks, on a disk-by-disk basis. This is done using the
Disk Management tool in Computer Management, as shown below: 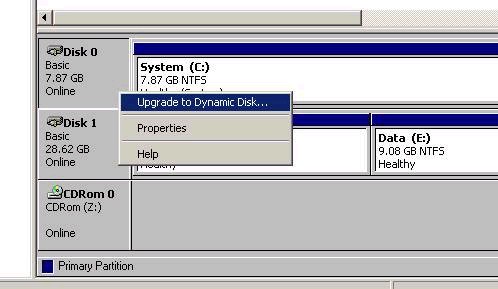