Why Docker Swarm Remains, Even as Kubernetes Adoption Grows

The big news at the DockerCon EU 17 conference that ran from Oct. 16-19 was the surprise announcement that Docker Inc would be supporting the Kubernetes container orchestration platform in a future release. 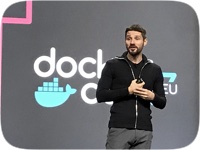 orchestration platform, which will continue to be supported. The plan is for Docker’s platforms to support both Kubernetes and Swarm, giving users the choice on which orchestrator will be the best fit for their own needs.

Docker Founder Solomon Hykes said that in his view Swarm and Kubernetes features and their communities have in fact been converging over the course of the last year or so. He also noted that he expects container orchestration will become a commodity over time. Being a commodity isn’t necessarily a bad thing either, as he noted Linux has also become a commodity.

“The important thing for us is that we’re innovating technology to make our customers happy,” Hykes said.

Fundamentally in Hykes’ view, all container orchestrators are now starting to look very much alike, and the only two that really matter at this point are Swarm and Kubernetes. He added that at the end of the day no one really cares which one wins; the only thing that organizations care about is that their container orchestration platform simply works.

Where Kubernetes and Swarm Fit into Future Docker Plans

While Docker and its engineering team will contribute to Kubernetes, that community is a multi-stakeholder open-source group. As such, code contributions might not always be rapidly adopted and embraced by the Kubernetes project.

Swarm on the other hand is a closely managed Docker open-source project and can be more tightly integrated with the overall Docker engine and platform.

“Swarm will be the golden standard of integration with Docker for a long time to come and an incubator of leading-edge orchestration features, especially in terms of security,” Hykes said. “Those features will then will bleed into other orchestration platforms over time.”

Hykes remarked that two years ago the container orchestration market was not very mature and the level of integration and user experience with tools like Kubernetes was not very high. Now in 2017 he notes that orchestration is well understood, and by bringing in Kubernetes, Docker is going to be able to solve a lot of different issues and give customers more choice.

Having choice and a modular platform approach is not a lesson Hykes has learned the easy way. Docker was originally a product of Hykes’ company dotCloud, which aimed to deliver a complete Platform-as-a-Service (PaaS). What Hykes learned from the dotCloud experience is that the best way to build and deliver a platform is in an incremental and modular way.