VANCOUVER, British Columbia — The OpenStack Foundation is facing a bit of drama and controversy as it deals with issues related to a keynote delivered by Ubuntu Linux founder Mark Shuttleworth at the OpenStack Summit here on May 21.

Typically, the OpenStack Foundation posts videos of all its sessions online within 24 hours, but with the Shuttleworth keynote, the video was apparently posted and then promptly removed. During his keynote, Shuttleworth took direct aim at his OpenStack competitor Red Hat, which apparently made some people in the OpenStack Summit community uncomfortable.

OpenStack Foundation sources told ServerWatch it was not Red Hat that actually directly complained to the OpenStack Foundation management about the keynote, asking for the video to be removed; rather, the sources said there were “general community members” and people that felt 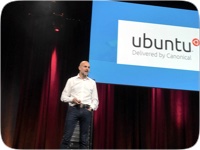 uncomfortable with the message of the keynote.

The general direction of OpenStack is as a community organization, where business competitors come together to collaborate on open source project development, and the sentiment expressed to the OpenStack Foundation was that the Shuttleworth keynote did not align with that direction.

As of press time, conversations were still ongoing with the OpenStack Foundation as to whether or not the keynote video will be re-uploaded and made publicly available.

Mark Shuttleworth has given some of the most impressive OpenStack Summit keynotes throughout the history of event, demonstrating feats of technical mastery.

At the 2012 San Diego OpenStack Summit event, Shuttleworth did a live demonstration where he migrated an OpenStack Essex release to the Folsom release. The upgrade was done on a live production server running live in-service applications. The whole process was completed in just three minutes.

At the 2013 Hong Kong OpenStack Summit, Shuttleworth built an OpenStack cluster live on stage allowing audience members to pick and choose which components would be used.

During the 2014 Atlanta OpenStack Summit event, Shuttleworth once again did a live demo, showing his company’s Ubuntu Orange Box as a “cloud in a box” and how easy it is to deploy OpenStack with the Ubuntu Juju system.

During his OpenStack Vancouver keynote here, Shuttleworth said he sees Canonical’s job as helping to remove the friction of getting OpenStack up and running. Part of removing friction is about being cost competitive.

“When we displace VMware, we are regularly told that a fully managed OpenStack solution costs half of the equivalent VMware solution,” Shuttleworth said.

Shuttleworth saved most of his competitive comments for Red Hat.

“Red Hat is telling analysts that even though the estate of RHEL systems is not growing very much, they are going to be able to charge four times the price, for the same application on the same socket, with OpenShift,” Shuttleworth said.

“Organizations have figured out that Ubuntu and upstream Kubernetes gives them 80 percent of what they need from a PaaS, and the incredible open ecosystem takes care of the remaining 20 percent, and that comes in at one-third the cost of OSP and OpenShift,” he added.

And Shuttleworth wasn’t quite done, noting that when his company is invited to bid in a paid proof of concept against Red Hat, Canonical wins four out of five times, including against companies that have never had any other version of Linux but Red Hat.

“If you’re only listening to Red Hat, you won’t have heard that every single major public cloud service uses Ubuntu to deliver Kubernetes, ” he said. “Google GKE, Azure Kubernetes and IBM Cloud private are all hosting containers on Ubuntu.”

Though part of Shuttleworth’s keynote was about competitive claims, he also did a demo of the open-source microk8s project, which delivers Kubernetes as Snap Linux package. Shuttleworth demonstrated how fast he could install Kubernetes with the snap package and then use it to run the Kubeflow machine learning package, which enables the TensorFlow AI/ML framework to run on Kubernetes.

Overall, the founder of Ubuntu Linux emphasized he is a supporter and backer of OpenStack.

“We continue to invest in OpenStack,” Shuttleworth said. “We think that OpenStack actually continues to be the most important open infrastructure project. This is the place to be, and we do it to make it more efficient, not more expensive.”