Ubuntu 12.04 dies today, but not for everyone. The Ubuntu 12.04 Long Term Support release first debuted in April 2012 and has been supported for five years.

Canonical has already announced it will be providing continued security updates for Ubuntu 12.04 as part of an Extended Security Maintenance 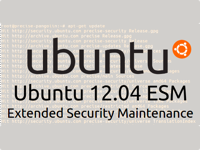 (ESM) program for paying customers. The 12.04 ESM program will extend the lifespan of the older Ubuntu operating system release with support for two more years, until April 2019.

Red Hat currently provides up to 10 years of support for its Enterprise Linux, and Kirkland said some Ubuntu customers have expressed an interest in that length of support as well. At this point, he noted Canonical will re-evaluate in 2018 if it needs to extend Ubuntu 12.04 support beyond the 2019 end date.

Kirkland explained that Ubuntu Advantage customers will be able to benefit from an Ubuntu 12.04 archive that will have the continued updates.

The ESM will backport vulnerabilities that impact Ubuntu 12.04 users.

“We have a process that triages all CVEs and rates the vulnerabilities as critical, high, medium or low,” Kirkland said.” We traditionally focus on the critical and high impact issues, and we’ll try to mitigate the medium and low impact issues.”

Typically, critical and high issues can include vulnerabilities that are remotely exploitable and represent the most risk to users.

It’s also important to note that not every vulnerability requires a patch. Kirkland explained some issues are mitigated with AppArmor security policies or with secure default configurations in Ubuntu.

“Ubuntu 12.04 was a watershed release for us, and there are still some 10 million systems that ping security.ubuntu.com every day looking for updates,” Kirkland said. “After April 28 (today), they won’t get those updates unless they are subscribed to the ESM update archive.”