The Tianhe-2 first jumped onto the world’s supercomputing stage a year ago, taking the crown of world’s most powerful computer. At the time, the Tianhe-2 was rated with a performance of 33.86 petaflops.

One full year later and Tianhe-2’s performance numbers are unchanged and it still holds down the top spot as the world’s most powerful supercomputer. 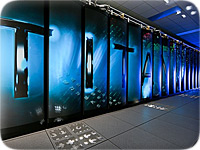 Back in June of 2013 the number two supercomputer in the world was the Cray Titan, at the U.S. Department of Energy’s Oak Ridge National Lab. A year ago, Titan clocked in at 17.59 petaflops. Titan’s performance, like that of Tianhe-2, remains unchanced for June 2014 and it still holds down the number two spot.

In fact, over the course of the last year, very little has changed among the performance rankings for the top 10 supercomputers in the world, as ranked by the Top500 list.

Looking at the list from the bottom up, the number 500 system on the list, a Cray XC30 at Deutcher Wetterdienst in Germany, clocked in at 133.7 teraflops.

“The last system on the newest list was listed at position 384 in the previous TOP500,” the TOP500 site stated. “This represents the lowest turnover rate in the list in two decades.”

Once again, Intel chips dominate the list with 85.4 percent of the supercomputers, and IBM Power processors hold an 8 percent share. AMD’s share now stands at 6 percent.

In terms of chip architectures, 53.6 percent of all systems had 8 or more cores per socket, and 13.4 percent had 10 or more cores.

Looking at the networking interconnects, Infiniband and Ethernet continue to split the field. On the June 2014 list, Infiniband holds a 44.4 percent share of systems.

HP and IBM once again dominate the list of supercomputing vendors. HP now holds a 36.4 percent share, while IBM holds 35.2 percent. Cray holds down the third spot with a 10.2 percent share.

While there are competing vendors, chip architectures, core counts and networking fabrics at play in the list of the worlds top 500 supercomputers, when it comes to the operating system of choice, there is no debate. Linux dominates the list with a 97 percent share, being installed on 485 systems on the top 500 list.

The U.S. Is Supercomputer #1 Again

NoSQL Databases: When to Use NoSQL vs SQL