One of the world’s smallest computing platforms is getting a bit more connected today. The Raspberry Pi Foundation announced on Feb. 28 the new Raspberry Pi Zero W small form-factor system.

The Raspberry Pi is an ARM-based system that was originally meant for students and hobbyists, though in recent years it has been widely used in all 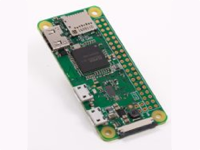 manner of embedded systems. The Raspberry Pi Zero, first launched in November 2015, has always been the smallest and the cheapest version of the Raspberry Pi, with a suggested retail price of only $5.

What the Zero has lacked is integrated wireless capabilities, but that now changes with the new Zero W. The Raspberry Pi Zero W uses the same Cypress CYW43438 wireless LAN and Bluetooth chip present in the somewhat larger Raspberry Pi 3 Model B that first debuted in February 2016.

“We imagine you’ll find all sorts of uses for Zero W,” Raspberry Pi Founder Eben Upton wrote in a blog post. “It makes a better general-purpose computer because you’re less likely to need a hub: if you’re using Bluetooth peripherals you might well end up with nothing at all plugged into the USB port. And of course it’s a great platform for experimenting with IoT applications.”

While the first Zero was only $5, all the new wireless capabilities in the new Zero W double the price, to $10 for each board.

The Zero W isn’t the first new computing board announced by the Raspberry Pi Foundation in 2017. In January the open-source effort announced the Compute Module 3 (CM3). The CM3 is based on the Raspberry Pi 3 and uses the same Broadcom ARM BCM2837 system-on-a-chip (SoC). As opposed to the Zero or the Raspberry Pi 3, the CM3 is a module that is intended to plug into a separate Printed Circuit Board (PCB).