Oracle CEO Mark Hurd sees where the market is heading, and in his view, it’s to the cloud. At the Oracle CloudWorld event in New York City on Feb. 12, Hurd revealed his cloud outlook and announced new cloud efforts.

Hurd predicts that by 2025 there will be 80 percent fewer data centers than today. All those data center resources and 80 percent of IT budgets will 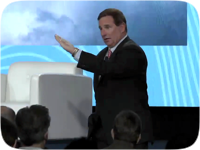 instead be spent on cloud services. Hurd also expects that most enterprise data will be stored in the cloud.

To support that vision of cloud dominance, Oracle is expanding its own cloud data center footprint. Oracle plans on opening 12 new data center regions around the world.

The expanded regions include new build-outs in China, India, Japan, Saudi Arabia, Singapore, and South Korea. In Europe, Oracle will be adding locations in Amsterdam and Switzerland. Oracle plans on having four new cloud data center regions in North America, with two in in Canada and two in the U.S.

Oracle uses the open-source OpenStack cloud platform as the basis for its cloud services. Oracle has been actively involved in OpenStack since at least 2014, when it announced support for OpenStack on both Oracle Linux and Solaris-based systems.

From a hardware perspective, Oracle’s cloud build-out will also likely make use of Oracle’s Exadata-class server systems. Oracle has been providing Bare Metal Cloud Services (BMC) since November 2016, based on the OpenStack Ironic project. In August 2017, Oracle expanded its bare metal cloud services to the latest generation of Exadata engineered systems.

A key benefit that Oracle is advocating with its cloud platform is an approach the company refers to as Oracle Cloud Platform Autonomous Services. The basic idea behind the autonomous services is that the applications running are regularly updated automatically by the platform for security patches as well as availability.

The first Oracle Cloud Autonomous service was Oracle’s namesake database and now the company is aiming to make all its applications follow suit.

“The future of tomorrow’s successful enterprise IT organization is in full end-to-end automation,” Oracle President of Product Development, Thomas Kurian, stated. “We are weaving autonomous capabilities into the fabric of our cloud to help customers safeguard their systems, drive innovation faster, and deliver the ultimate competitive advantage with smarter real-time decisions.”