The ability to easily move applications from the gen1 Oracle cloud to Gen 2 and from other clouds to Oracle is a cornerstone of the Gen 2 Oracle cloud, Ellison said.

“Our goal has always been as we move from one generation of computing to the next, as we moved from mainframes, to mini computers, to client server PC networks, to internet architecture to the cloud, in every generation, we want to protect your investment in data and applications,” Ellison said.

At the core of the Gen 2 Oracle Cloud Infrastructure is an RDMA (Remote Direct Memory Access) based network.

“It’s the ability of computers that are networked together to move data from one computer directly into the other computer without taking an operating system hit,” Ellison said. “It just goes direct from one spot to another; it creates a very low latency network, and you can move data very, very fast.”

RDMA is also at the core of Oracle’s engineered systems, the Exa-class servers, which run Oracle Linux.

Ellison said the cloud control plane in the Gen 2 Oracle cloud is physically separate from the data plane on which customer data and applications run, protecting the cloud perimeter and every user from every other user.

The Oracle Cloud footprint is also set to expand, as Ellison noted that Oracle will be implementing additional cloud locations and he added that Oracle is willing to build a Gen 2 Cloud in a customer’s data center as well. 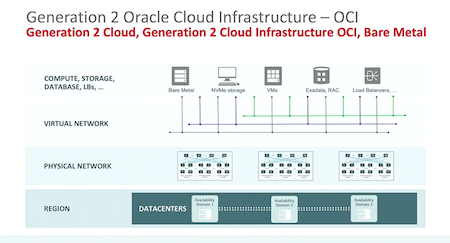 As part of the Gen 2 rollout, Ellison announced new bare-metal services that enable organizations to provision their own Exadata server systems.

“If you’re very security conscious and you don’t want any other users in your Exadata machine, you want dedicated infrastructure, and you want complete isolation from other customers. We will we will provide that to you in our public cloud,” Ellison said. “It really is a unique feature of the Oracle generation 2 cloud, so you completely control that machine.”