Oracle reported its fourth quarter fiscal 2013 earnings late Thursday, showing growth in some areas and decline in others.

“Revenue was up approximately 50 percent, as we took considerable market share from our primary competitor IBM P-Series, which was down 32 percent in their most recent quarter,” Oracle CEO Larry Ellison said during his company’s earnings call. “All our Exa products — Exadata, Exalogic, Exalytics and the Big Data Appliance and the Oracle Database Appliance — all had their best ever quarters.”

Oracle’s Exa-class systems are what Oracle refers to as “Engineered Systems,” containing compute, networking, storage and applications in an integrated chassis. The Exadata is the database machine and was most recently updated in October of 2012 with the Exadata X3 machine. 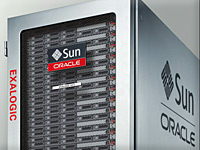 The Exalogic is a Java Middleware-optimized box and was last updated with the Exalogic 2.0 release.

Ellison said that in bookings, his company sold over 1200 engineering systems in the fourth quarter, including more than 600 Exadata boxes.

“For the year, we sold over 3,000 Engineered Systems, more than all the previous years combined,” Ellison said. “Tesco, Fidelity, Siemens, McGraw-Hill, Chicago Mercantile Exchange, Saudi Telecom — to name just a few of the companies that bought Engineered Systems this past quarter.”

The current family of Exa-class Engineered Systems are all powered by Intel x86 chips running on Oracle Linux.

Oracle’s SPARC servers that run Solaris were updated in March of this year with the new T5 and M5.

“Our T5 and M5 servers feature the fastest microprocessor in the world, faster than Intel and faster than IBM P7+ on numerous industry standard benchmarks,” Ellison said.

Ellison cautioned that it is still “early days” for the T5, though he is encouraged by the numbers he has seen so far in terms of the order pipeline. He added that there is a large installed base of SPARC users for Oracle to go after.