Red Hat is increasingly focusing on its OpenShift container platform for enabling organizations to deploy and deliver applications. OpenShift was a dominant topic at the 2018 Red Hat Summit, with multiple announcements and pronouncements about the Kubernetes platform’s future.

Among the key OpenShift sessions was a roadmap session on May 9, in which five Red Hat product managers detailed future feature capabilities that are set to come to the platform over the coming year.

One of the largest areas for new features in OpenShift is coming from Red Hat’s acquisition of CoreOS. Multiple components from CoreOS are set to arrive in OpenShift in the coming months, including a new administrator view.

“We have an entirely new view coming to OpenShift that is an admin-focused view to augment the existing developer-focused view,” former CoreOS (now Red Hat) Product Manager Rob Szumski said.

The CoreOS self-driving cluster concept will also be coming to OpenShift, enabling automated operations. “We’re excited to re-platform OpenShift to enable in-place rolling updates for the cluster itself,” Szumski said.

The metering feature will come by way of the open source Prometheus project and will enable administrators to do reports based on namespaces and pods. The reports will be able to detail usage in a way that can be used by account software or for capacity-planning purposes.

Red Hat Product Manager Mike Barrett detailed a new Cluster Operator capability being developed for OpenShift that will expand on the CoreOS notion of automation.

“What if we installed Kubernetes and we let Kubernetes install our clusters for us?” Barrett said. “That’s the path we’re moving forward with the Cluster Operator.”

Among the capabilities OVN will bring to OpenShift are IPv6 support, improved traffic isolation and quality of service enhancements.

Curry said work has also been ongoing to better enable OpenShift on top of OpenStack. He said Red Hat has been working upstream with the OpenStack Kuryr to create a Kubernetes Container Networking Interface (CNI) plugin that will provide an adapter to communicate with the OpenStack Neutron network service. The move will help remove a double encapsulation issue that now exists.

“Currently, we had OpenShift SDN running on top of OpenStack’s SDN,” Curry said. “By providing plumbing to connect to Neutron directly, we collapse to a single SDN.”

That means that anything certified for neutron can now be run in OpenShift.

Going a step further, Red Hat is working on integrating support for the Istio service mesh into OpenShift. Curry said that with Istio, networking services can more easily be made available to container applications.

The next major release of OpenShift, version 3.10, is set for a July release. OpenShift 3.11 is currently scheduled for September, with OpenShift 3.12, which will integrate all the CoreOS components, set for December. 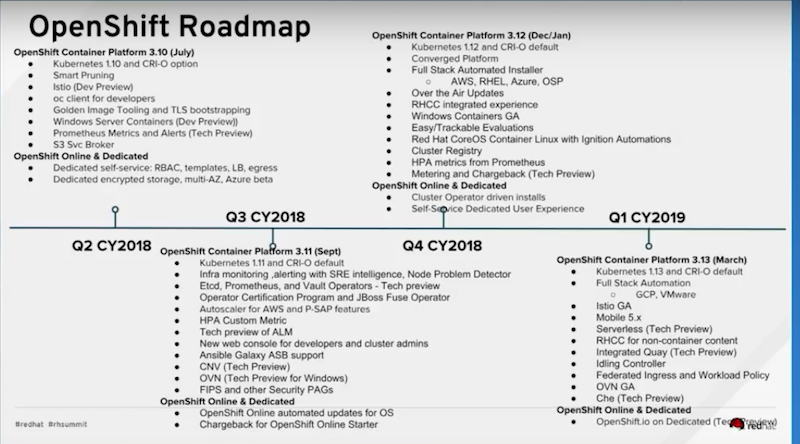