The latest semi-annual list of the world’s top 500 supercomputers was released on November 14, showing little change at the top of the list. The China-based Sunway TaihuLight supercomputer, which first claimed the title of the world’s fastest system in June 2016, still reigns supreme. 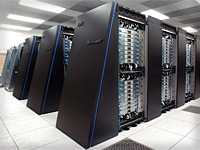 Technology (NRCPC), and it is installed at the National Supercomputing Center in Wuxi, China. Tianhe-2, which was the top supercomputer in the world from June 2013 to June 2016, once again came in second with its score of 33.86 petaflops.

In terms of overall standings, the U.S and China now have 171 systems each on the Top500 supercomputer list, accounting for two-thirds of all supercomputers in the world.

Overall, the supercomputing landscape is getting faster each year, with the current entry-level system on the top 500 list coming in at 349.3 teraflops, up from the entry level of 206.3 teraflops in November 2015. The total performance of all 500 computers on the list is now 672 petaflops, a 60 percent increase from a year ago.

In terms of system architecture components, Intel dominates the list with 462 out 500 systems. Hewlett Packard Enterprise (HPE), inclusive of its recent acquisition of SGI, is the top systems vendor with 140 supercomputers on the list.