After a week of speculation and reports that IBM was selling its server business to Lenovo, official confirmation of the deal came this morning: IBM is getting out of the low-end x86 server business. 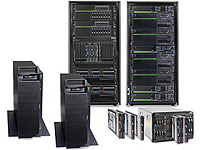 NeXtScale and iDataPlex servers portfolios are all being sold to Lenovo for the tidy sum of $2.3 Billion.

Financial terms of the deal have Lenovo paying IBM approximately $2 billion in cash with the remaining $300 million in Lenovo stock. In addition to the technology and the money, 7,500 IBM employees are now also being offered jobs by Lenovo.

IBM is not exiting the server business altogether, though, as it will continue to push its Power system and System z mainframe architectures.

“This divestiture allows IBM to focus on system and software innovations that bring new kinds of value to strategic areas of our business, such as cognitive computing, Big Data and cloud,” Steve Mills, Senior Vice President and Group Executive, IBM Software and Systems, said in a statement. “IBM has a proven record of innovation and transformation, which has enabled us to create solutions that are highly valued by our clients.”

The move by IBM comes barely a day after the company reported full year fiscal 2013 results that were hit by the struggling server hardware business. For the full year, IBM’s 2013 revenue was reported at $99.8 billion, a 5 percent decline from 2014, with net income of $16.5 billion, down 1 percent.

IBM’s hardware business was down by $1.7 billion for the full year, with weakness in server hardware, including both x86 as well as Power-based systems. One bright spot that IBM had in 2013 was its PureSystems integrated server approach, which actually grew in 2013. PureSystems were first launched by IBM in April 2012.

As part of the Lenovo deal, IBM will retain the Power-based version of the PureSystems.

The server sale to Lenovo marks the second time that IBM has divested a major part of its operations to the Chinese hardware vendor. In 2005, IBM sold its PC business to Lenovo for $1.75 billion.

“This acquisition demonstrates our willingness to invest in businesses that can help fuel profitable growth and extend our PC Plus strategy,” Lenovo chairman and CEO Yang Yuanqing said in a statement.

“With the right strategy, great execution, continued innovation and a clear commitment to the x86 industry,” Yuanqing continued, “we are confident that we can grow this business successfully for the long-term, just as we have done with our worldwide PC business.”