IBM’s Power server architecture has typically been thought of as a technology for really large enterprises and huge data center deployments. IBM now sees a wider deployment future for Power.

“Mid-sized companies have the same challenges as big companies when it comes to gaining insights from Big Data,” Zarina Stanford, Vice President of Power Systems at IBM, told ServerWatch. “Using a system like POWER that is designed explicitly to handle compute-intensive processing and analytics is what is happening here with our eight new Power system models.”

The 710 Express provides up to an 8-core configuration, while the 730 Express is a dual-socket system that can provide up to 16 cores. 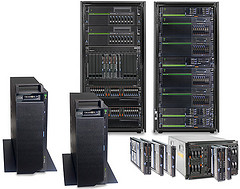 As to why IBM has Power servers that are Linux-only in the new portfolio, Stanford said it’s all about customer demand.

As an example, Stanford noted some governments have specific usage requirements to include Linux and open source technologies.

“Having the option to have AIX or IBMi is immaterial for those customers,” Stanford said. “Therefore we put out a Linux only set of servers.”

“Every core on a Power Sever can have up to 20 virtual machines inside a core,” Stanford said. “That is powerful virtualization that is not available on x86 or VMware type configurations.”