When most people think about mainframes, they tend to think about big iron that is very stable, though not particularly agile or flexible. That’s a myth IBM is now aiming to dispel through the rapid pace of both hardware and software innovation in its LinuxONE class of mainframes.

The LinuxONE mainframe was first announced in August 2015 as a Linux-focused version of IBM’s mainframe technology. 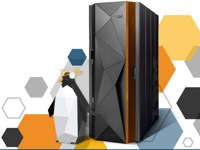 “We’re building on what we announced in August,” Ross Mauri, General Manager, z Systems at IBM, told ServerWatch. “We’re going to continuously expand the ecosystem and the capabilities around LinuxONE.”

The expanded capabilities announced today include new versions of the Emperor and Rockhopper, which provide more performance than the initial releases.

The Rockhopper offers an improved microprocessor and enhanced I/O capabilities and now also supports SNT (simultaneous multi-threading) 2. Additionally, IBM’s OpenPlatform, which is a set of Apache-based capabilities around analytics and Big Data, is now supported on LinuxONE.

IBM’s mainframes are no stranger to Linux, with contributions to the upstream Linux kernel over the past 15 years. With the LinuxONE mainframe, IBM’s efforts are accelerating and there all manner of code contributions from IBM in Linux that make use of mainframe technology now.

“We’ve added a vector engine to the processor, so we have done work with the kernel community to enable that,” Marcel Mitran, CTO for IBM LinuxONE, told ServerWatch. “We’re always doing ongoing generalized tuning and adding new instructions; we now have transactional memory capabilities supported in the Linux kernel as well.”

IBM is also working on improving next-generation communications channels that make full use of the SMP (Symmetric Multiprocessing) capabilities of the LinuxONE mainframe. Mitran explained that one of the advantages of being a big SMP box is that virtual guests can sit next to each other and instead of data going over a wire to share information, the socket layer is all in memory.

“We have had hyper-socket technology for a long time and the idea is simple, we can provide really low-latency communication in-memory,” Mitran said. “If we can take the time that data would have spent in going over the wire, and use that time to deliver better service levels, we can provide better and faster insights.”

With the new LinuxONE update, IBM has added support for the open-source Go language on the mainframe. Go is becoming increasingly popular in multiple areas of technology and is used widely with Docker containers. Additionally, the IBM-backed OpenLedger blockchain project also has a strong Go component.

Looking forward, Mauri said LinuxONE will continue to expand to support relevant tools and technologies as they emerge.

“I hope to have something new and cool to talk about every quarter,” Mauri pledged. “We’re moving very fast and in an agile way, both as a company and around LinuxONE.”