The new Itanium NonStop servers arrive just a week after HP emerged triumphant in the first phase of a legal battle against Oracle, over Itanium software support.

“The NS2100 doesn’t replace any server, but extends the NonStop portfolio to more customers, and is targeted at financial services, manufacturing, telecommunications, and healthcare industries, and emerging markets,” Mark Pollans, Worldwide NonStop Product Manager at HP, told ServerWatch. “Think of any markets NonStop is currently serving, but in smaller countries, operations and businesses.”

Pollans added that the target market for the NS2100 includes customers that are seeking a cost-effective way to attain mission-critical reliability and agility for their most important business applications.

The NS2100 is powered by either two or four Intel Itanium 9300 processors. NS2100 systems can be configured with up to 32GB of memory, and all systems include redundant power supplies, power distribution units and fans. 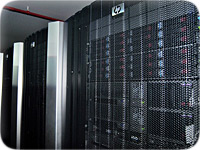 In contrast with the NS2200 server platform that HP introduced a year ago in August of 2011, there are a number of key differences in the NS2100. The NS2100 will only be available with AC power, whereas the NS2200 offers both AC and DC power options.

“All of this works to create a fully integrated system architecture, that in addition to the hardware and OS, also supports a massively parallel relational database (SQL/MX) [as well as] high volume on-line transaction processing (OLTP) with industry standard programming services (e.g Java, POSIX, CORBA, etc.), which are integrated and tested together as a solution (e.g. J06.14),” he added.

Pollans said that another aspect of this architecture is the ability to connect the NS2100 into a distributed network that provides linear scalability and a single system image across multiple systems.

While NonStop OS is its own platform, applications that run on industry-standard x86 servers can also find a home on the new servers.

While the NonStop system can run Java and virtualized x86 applications, the NS2100 is different than an x86 server.

The basic configuration for the new NS2100 series NonStop servers begins at $75,000 USD.