Initially, Moonshot was all about ARM but has since expanded to Intel x86 as well. Today, HP announced new Moonshot solutions for specific use-cases that include virtual application delivery, video transcoding and managed web hosting.

For virtual application delivery, HP is partnering with Citrix for its XenApp platform. XenApp leverages the 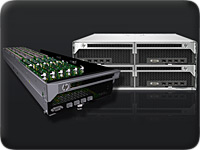 open-source Xen hypervisor and is a competitive solution to VMware’s vSphere and ESX hypervisor technologies.

The ProLiant m710 is being positioned as the Moonshot server cartridge for video transcoding as well. HP is partnering with the Vantix Media Platform and Harmonic Inc. to enable their respective video technologies to transcode video on the Moonshot system.

“For a global media company, innovation is key and HP Moonshot has been a great tool in our arsenal,” John Herbert, chief information officer and executive vice president, 20th Century Fox, said in a statement. “With HP, we’ve been able to repatriate digital marketing websites from the public cloud, as well as expedite our extreme file transfer capabilities, all at unparalleled economics while at the same time being kind to the planet.”

For web infrastructure, HP is positioning its Moonshot ProLiant m300 server cartridge as the ideal solution. The m300 is powered by an 8-core Intel Atom C2750 running at 2.4 GHz with up to 32 GB of RAM. The m300 was first announced back in September of 2013. As part of the new web infrastructure solution, HP is offering its customers the choice of Red Hat Enterprise Linux (RHEL) or Ubuntu Linux.

“The unique architecture of HP Moonshot delivers extreme density and power efficiency,” Paul Santeler, vice president and general manager for HP Moonshot, said in a statement. “HP Customers can expand their offerings and prepare for the future, while significantly reducing the complexity of their infrastructure.”