How Kubernetes’ Founder Is Building an Un-Distribution at Heptio

Over the last four years a lot has changed, with Kubernetes now one of the most talked about infrastructure paradigms. And Beda is no longer at Google; he’s at a startup he co-founded called Heptio.

In a video interview, Beda explains how Heptio has developed what the company refers to as a “un-distribution” of Kubernetes as well as a series 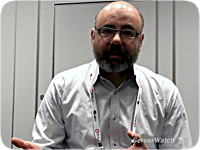 of different open source efforts. Among the projects launched by Heptio are the Contour load balancing project, Ark recovery, Sonobuoy diagnostics and Ksonnet.

“From Heptio’s point of view, our theory from the get go was we wanted to build value for bigger companies and enterprises, with the idea that the open source (Kubernetes) project meets a certain need,” Beda said. “But as you start looking at the more complex needs of transitioning legacy systems and integrating with existing enterprise systems, there are a whole bunch of gaps that need to be filled.”

Unlike other software vendors that are part of the Kubernetes community, Heptio doesn’t want to build a software distribution of Kubernetes. Rather, the Heptio Kubernetes Service (HKS) is about support and services to help organizations deploy and manage upstream Kubernetes. It’s an approach Heptio has referred to as being an Un-Distribution.

“Our goal with the whole idea of the un-distribution is we want to provide the best parts of a distribution without necessarily some of the downsides that come along with that,” Beda said.

Beda said that generally what happens with a distribution of an open source project is a software vendor takes the upstream code, cleans it up so it’s fit for enterprise consumption, and then ships a combination of tools that are proven to work well together.

“Upstream Kubernetes doesn’t need a lot of clean up because the community is so strong, and we want to keep it that way,” he said.

As such, a lot of the work Heptio is involved with is all upstream with an effort to make Kubernetes easier to install and use. Beda said Heptio is putting a lot of effort into the kubeadm installer effort from the upstream project as well as the cluster API effort. As part of HKS, Beda said Heptio is developing a set of validated designs that integrate best practices for deployment.

“Our point of view is that if we want to bring Kubernetes to enterprises, we have to realize that anybody that has a business has a complex environment and they can’t just rip the bandaid off and change everything at the drop of a hat,” Beda said. “So helping them [customers] work with those complex environments is key to our success.”

Watch the full video with Joe Beda below: