The modern container revolution started with Docker and its eponymous Docker Engine. Docker Engine is the runtime and tooling that enables container applications, defined by a dockerfile, to run on top of a host operating system in an isolated “container” section.

“We are here because of docker engine,” Maink Taneja, Sr Product Manager at Docker said in a session at the Dockercon Europe conference.

The Docker Engine in 2018 isn’t the same technology it was when Docker first started. Rather, it has evolved significantly in recent years and is now based on the containerd container runtime at the core.

So what actually is the modern Docker Engine architecture? 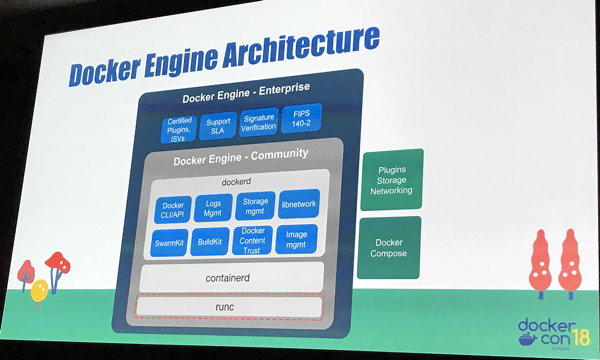 As per the above image, the most basic level of Docker Engine today is runc, which is an open-source implementation of the Open Container Initiative (OCI) runtime. On top of runc is containerd, a project that is now hosted by the Cloud Native Computing Foundation (CNCF), which is also the home of the Kubernetes container orchestration project.

Beyond just a basic runtime that enables container applications to run, the Docker Engine also includes SwarmKit, which is Docker’s own container orchestration system. Additionally, Docker Content Trust, powered by the CNCF Notary project, is part of the engine and provides a system for cryptography signing and authorizing container images.

Networking is directly included via the libnetwork plugin, and storage management is a directly integrated feature as is log management.

Within containerd itself, there are three core elements: container execution, image management and the container filesystem.

The most recent version of containerd that is part of Docker Engine is version 1.2. Among the features added in containerd 1.2 is a runtime shim that enables different runtimes to be operated from containerd.

In the latest Docker Engine 18.09 Community Edition update there have been multiple build improvements, including performance boosts that enable parallel application build stages.

The stable version of Docker Engine Community Edition is released twice a year, while the Enterprise edition is updated once a year. 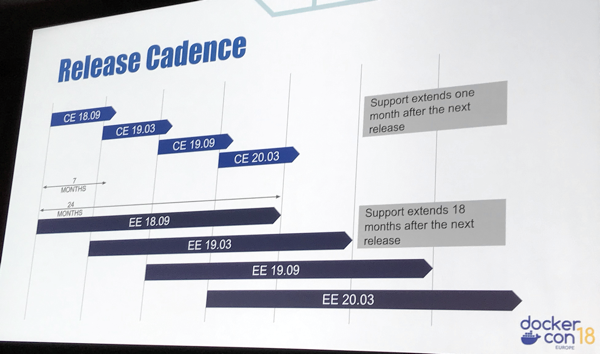