Hosting vendor GoDaddy first debuted its own OpenStack-powered cloud service in March 2016, with high hopes of success. Those hopes have been dashed, as GoDaddy sent out notices to its customers this week advising them that the service will be shut down.

The GoDaddy Cloud Servers product was intended to be an easy on-ramp to the cloud, providing customers with an alternative to DigitalOcean or the 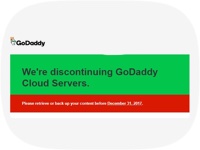 larger cloud vendors, including Google and Amazon. The service also benefited from a partnership with Bitnami, providing a simple way for users to install applications on the cloud servers.

The Cloud Servers business is set to shut down on December 31st, though Bitnami apps and images will no longer be supported after November 15.

The OpenStack Cloud business isn’t the only business that GoDaddy is exiting. GoDaddy announced on July 18 it’s selling its PlusServer business for $456 million.

The PlusServer business was originally picked up by GoDaddy as part of the acquisition of HEG, which is a deal that closed in April 2017.

GoDaddy first announced its acquisition of HEG (Host Europe Group) in December 2016 for $1.79 billion. At the time of the acquisition, GoDaddy specifically noted it was exploring strategic alternatives for the PlusServer managed hosting business.