While the first quarter of 2017 was not a particularly good one for the global server market, it’s a trend that did not continue into the second quarter.

According to both IDC and Gartner, the worldwide server market grew in the second quarter of 2017. IDC 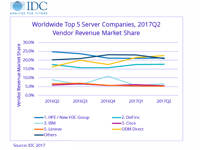 “The growth for the quarter is attributable to two main factors. The first is strong regional performance in Asia/Pacific because of data center infrastructure build-outs, mostly in China,” Jeffrey Hewitt, research vice president at Gartner, said in a statement.

“The second is ongoing hyperscale data center growth that is exhibited in the self-build/ODM (original design manufacturer) segment,” Hewitt continued.

“Hyperscalers as a group made a large deployment push in the second quarter led by Amazon, which alone accounted for more than 10% of server units shipped in the quarter,” Kuba Stolarski, research director, Computing Platforms at IDC, said in a statement. “As hyperscalers tend to lead the market on most architectural updates, we expect the rest of the market to catch up over the next several quarters.”

IDC reported it is seeing an increase in x86-based system revenues, with 2Q17 reported at $14.3 billion for a 10.4 percent year-over-year increase. Non-x86 system revenue continued to decline in 2Q17, falling 21.5 percent to $1.5 billion. Gartner reported similar trends for x86 and non-x86 systems, with x86 revenue up by 6.9 percent.

“RISC/Itanium Unix servers fell globally for the period — down 21.4 percent in shipments and 24.9 percent in vendor revenue compared with the same quarter last year,” Gartner’s Hewitt stated. “The ‘other’ CPU category, which is primarily mainframes, showed a decline of 29.5 percent in revenue.”

From a vendor perspective, IDC has HPE and Dell Inc tied for first place in terms of worldwide server shipments, each holding a 20 percent market share. Looking at revenue, HPE holds the top spot at $3.4 billion, with Dell in second at $2.8 billion for 2Q17.