Perhaps even more interesting is that revenue growth in the first quarter actually outpaced server shipments. IDC reported that 2.7 million servers were shipped in 1Q18, for a 20.7 percent gain over the first quarter of 2017.

“Hyperscale growth continued to drive server volume demand in the first quarter,” Sanjay Medvitz, senior research analyst, Servers and Storage at IDC, wrote in a statement. “While various OEMs are finding success in this space, ODMs remain the primary beneficiary from the quickly growing hyperscale server demand, now accounting for roughly a quarter of overall server market revenue and shipments.”

Demand for x86 continues to be the driving force in the sever market again during the first quarter. IDC reported x86 server revenue came in at $17.4 billion, for a 41.0 percent year-over-year gain. Non-x86 server revenue, which includes IBM Power and mainframe system servers, grew by 15.5 percent to $1.4 billion. 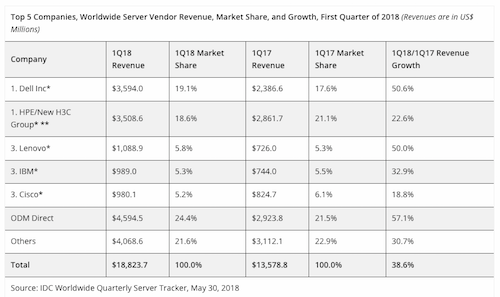