Facebook started the Open Compute Project (OCP) with the release of their server design details back in April of 2011. The intent was to facilitate and encourage innovation in the design of the next generation of open hardware, specifically aimed at high-density environments. Penguin Computing has teamed with AMD to build a third-generation OCP-based system, which has been certified to the latest specifications.

High-density environments amplify even small increments of change in power and cooling. When you decrease the power requirements of a single system, you multiply the savings spread over an entire data center. The latest OCP designs incorporate things like dual power inputs for both AC and DC power. In most cases, bare motherboards slide into 42U racks to eliminate the need for individual fans on each board and increase airflow throughout the rack.

Building a one-size-fits-all computing platform is typically not the best approach when you’re looking for the most performance and power efficiency possible. The OCP project targets three use-case scenarios as a basis for the design of their reference architecture: High Performance Computing (HPC) server, general purpose virtualization server, and scale-out storage server. Penguin’s Altus OCP31 is the result of a partnership with AMD to build and sell a product using the baseline OCP design.

For high-density installations the system board slides into a special server rack with external connections provided through the two long connectors mounted on the short edges of the board (see Figure 1). Our review unit came packaged in a typical 1U server case complete with dual redundant power supplies and an ample number of fans for cooling. Storage options include a variety of SATA and SAS disks in either 2.5- or 3.5-inch form factor. The 1U box will accommodate either four 3.5-inch or ten 2.5-inch drives. A total of twenty-four DIMM memory slots provide a max capacity of 768GB with 32 GB parts.

The dual-socket CPU design requires memory to be installed in pairs with matched sets. Expansion I/O options come in the form of two PCIe X8 Gen3 slots plus a single mezzanine slot for the dual 10 GbE board. The 1U case includes a high-efficiency 750W power supply capable of running on 100 to 240 volts AC.

Running the Phoronix Test Suite for Linux produced an average result for the processor of 7757 Kpos per sec and RAM speed of 8078.32 MB per sec. That compares quite favorably with other similar systems based on data from the OpenBenchmarking.org website.

One of the first things we did after powering up the system was update all the software. The base OS shipped with the system was CentOS 6.4. Running the command “yum update” ultimately updated the system to CentOS 6.5, which was released on December 1, 2013.

To verify the version of a Red Hat based system, simply type “cat /etc/redhat-release.” This will reply with CentOS release 6.5 (Final) once the update has been accomplished.

CentOS 6.x is one of the target platforms for Red Hat’s OpenStack efforts as it shares a common code base with Red Hat Enterprise Linux (RHEL). We used the quick start instructions on the RDO site to get the basic pieces needed to set up OpenStack on a single server. The entire process took less than fifteen minutes and, once complete, launched the main OpenStack controller processes. Figure 2 shows what the OpenStack dashboard looks like from an external browser. 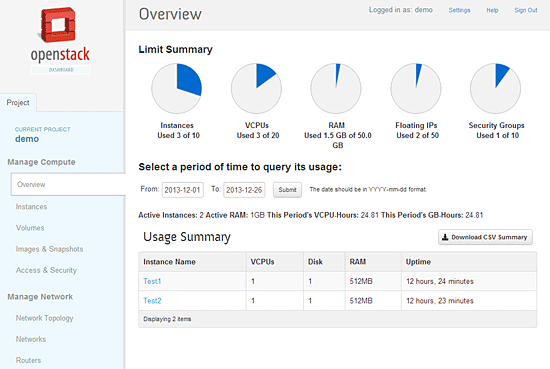 The OpenStack platform is one of the target operational scenarios for OCP, and it runs well on the Altus OCP31. With plenty of memory and CPU horsepower, it can handle lots of virtual machine instances with ease.

Figure 3 shows an OpenStack “Create An Image” dialog that establishes a baseline image from which to launch individual instances. The default “cirros” image consumes only 512MB of RAM, 1 Virtual CPU and 1 GB of Disk space. While you probably won’t run any production workloads on one of these instances, you might use them for development and testing. 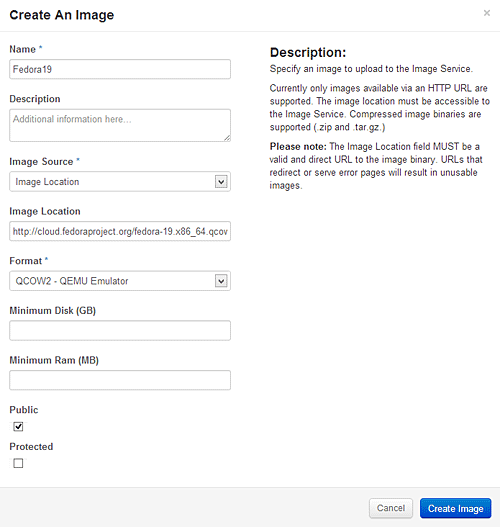 The retail price for the Penguin Computing Altus OCP31 as tested comes to $6,410, which is not a bad price when you figure around $2,400 for the cost of the memory and around $1,800 for the two CPU chips. Prices would obviously be lower if you were purchasing a large quantity of these systems and cheaper still if you didn’t need the 1U case.

The OCP concept definitely has advantages for any datacenter architect looking to save on operating costs as well as initial procurement costs. Penguin Computing’s Altus OCP31 delivers the necessary performance to run the target applications with ease. It’s definitely worth consideration if you’re looking for a solid platform to build out an OpenStack deployment.