OpenStack vs. Linux: How Do the Communities Differ? [VIDEO]

Intel is a leading contributor to both projects and is more aware than most of the differences and similarities in the two communities. 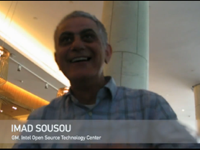 Sousou also sits on the Board of Directors for both the Linux Foundation and the OpenStack Foundation.

In a video interview, Sousou discusses his views on open-source and why OpenStack and Linux aren’t all that different.

“One could look at Linux and OpenStack and make line-item comparisons,” Sousou said. “For licensing they’re different, the governance model is different and you can go down almost any vector and they will look like two completely different things — in reality, though, they’re actually not.”

In Sousou’s view, the Linux kernel and OpenStack developer communities both revolve around their respective core technologies and technical merit. He added that both projects are focused on the open-source model of software development and collaboration.

“There are different approaches definitely,” Sousou said. “Both projects have their own shortcomings and their own strengths, but they work.”

Watch the full video interview with SouSou below:

OpenStack Found. Not Worried about the Death Star