Ubuntu developers are closing in on the next major release, with the Ubuntu 15.10 Wily Werewolf set to debut on October 22. Ubuntu 15.10 is in many respects an incremental release ahead of the 16.04 Long Term Support release in 2016.

Among the key innovations in 15.10 is wider use of the Snappy technology for packaging, though it won’t replace the core .deb packaging system anytime soon, if ever.

In a video interview with ServerWatch, Ubuntu founder Mark Shuttleworth discusses the key themes in Ubuntu 15.10. Shuttleworth also explains the 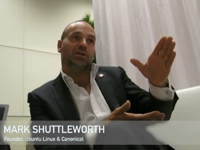 relationship between the .deb and snappy packaging schemes and how Ubuntu users will be able to benefit from both.

Shuttleworth explained that it’s not an either/or situation with using .deb or snappy packages. For example, Shuttleworth said that if there is a security vulnerability, like a Heartbleed flaw, the way Ubuntu fixes the issue is with a .deb package.

“We build Snappy out of the built deb, so we can’t build Snappy unless we first build the deb,” Shuttleworth said.

Going forward, Shuttleworth said that Ubuntu users will still get access to an archive of .deb packages. That said, for users of a Snappy Ubuntu-based system, the apt-get command no longer applies. However, Shuttleworth explained that on a Snappy-based system there will be a container that contains all the deb packages.

“The nice thing about Snappy is that it’s completely worry-free updates,” Shuttleworth said.

Watch the full video interview with Mark Shuttleworth below: