IBM calls it “System z” these days. But despite years of the very best marketing efforts around the “Z” moniker, the name mainframe is here to stay.

“IBM’s mainframe division keeps chugging along, picking up some new customers here and there, particularly overseas, but the vast majority of the business is working with their existing installed base,” says Dan Olds, an analyst with Gabriel Consulting Group (GCG). “Mainframe sales are very cyclical, with revenue numbers rising sharply when IBM introduces a new model, then dropping down to a more or less steady state.”

IBM rode this cycle in 2010, with sales up almost 70% with the introduction of new machines. In 2011, revenue dropped 31% compared to 2010, according to Olds. What’s interesting, though, is that the amount of MIPS shipped in 2011 was only 4% lower than the huge number of MIPS shipped in 2010 — at the same time, IBM somehow increased mainframe profit margins. 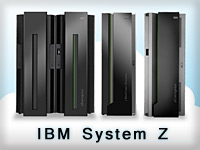 “This tells us that there is still a sustained appetite for mainframe capacity,” says Olds. “So while the mainframe isn’t in the glory days, it’s certainly a healthy and profitable business for IBM.”

The hike in 2010 followed the introduction of the IBM zEnterprise System, which includes the zEnterprise 196 (z196), zEnterprise BladeCenter Extension (zBX) and Unified Resource Manager (URM) for allowing deployment of workloads across mainframe, POWER7 and System x servers with management as a single, virtualized system.

IT services provider BG-Phoenics in Germany was an early adopter of zEnterprise with zBx. It can run z/OS and Linux on its z196 servers, IBM AIX on Power Systems blade servers in the zBX, and both Linux and Microsoft Windows on Intel-architecture blades in the same zBX. All the hardware is monitored and controlled using URM. An additional benefit is having the application servers physically and logically close to is core DB2 databases on the z196 server.

Since that 2010 release, IBM hasn’t been resting on its mainframe laurels. In February 2011, it added an IBM WebSphere DataPower Integration Appliance XI50 for zEnterprise into the zBX mix. The DataPower XI50z is a workload-optimized appliance that helps data and applications on different servers to communicate regardless of the type of platform.

It does this by processing XML and Web services protocols so that data can be understood and used by all types of servers. The company makes big claims for this arrangement. “When integrated within zBX, the DataPower XI50z can offer up to 23 times better price/performance compared to competitive systems,” states Michael Dickson, worldwide System z Product Offering Manager at IBM.

In July 2011, IBM introduced the IBM zEnterprise 114 (z114) mainframe server. The new server for mid-sized organizations costs 25% less than its predecessor, the System z10 BC server. IBM is projecting that workloads from 40 x86 processors running Oracle software can be consolidated onto a z114 with three processors running Linux, with a resulting drop in overall IT costs. At a starting price of under $75,000, this is IBM’s lowest ever price for a mainframe server.

In October 2011, IBM announced zEnterprise support for Microsoft Windows workloads (on System x blades installed within a zBX). IBM positions this as a first-ever bringing together of the mainframe and distributed computing worlds as an integrated “system of systems.”

“This offers clients a variety of money-saving benefits, such as faster and automated access to computing resources, reduced administration and lower training costs,” says Dickson. “By bringing Windows and the mainframe together, IBM is helping clients to innovate more freely across multiple environments — across z/OS, Linux, AIX and now Windows.”

Over the last two years, no System z models have been end-of-lifed. However, the z10 EC and z10 BC will be withdrawn from marketing in June 2012. That means they will quietly fade away, although they will continue to be serviced by the company for years to come.

That will leave two mainframes the company is stressing – the 114 and the 196.

The z114 is aimed at mid-sized and growing businesses running mission-critical workloads, hosting private enterprise clouds or looking for a backup, standalone development machine. The microprocessor has a higher-frequency superscalar design (up to 14 processors running at 3.8 GHz), improved cache structure, an “out of order” execution sequence and over 100 new hardware instructions to deliver high per-thread performance for DB2, WebSphere and Linux workloads.

These specialty engines, the System z Application Assist Processor (zAAP), the System z Integrated Information Processor (zIIP) and the Integrated Facility for Linux (IFL), are designed to integrate Java, XML and Linux applications and technologies with existing workloads, as well as to optimize system resources and reduce costs on the mainframe. For example, using a fully configured machine running Linux for System z, it is possible to create and maintain a Linux virtual server in the z114 at next to no cost ($500 per year, according to Dickson).

The z196 is IBM’s premier mainframe offering. It is capable of over 50 Billion Instructions per Second (BIPS). The z196 has up to 96 cores running at 5.2 GHz, and delivering up to 40 percent improvement in performance per core and up to 60 percent increase in total capacity compared to its predecessor, the z10 EC. As many as 80 cores are configurable for specialty engines.

“The z114 is geared toward mid-sized clients or enterprises with lower capacity, memory and I/O needs while the z196 offers extreme scalability for the most demanding enterprise-class businesses,” states Dickson.