Blade servers have been around for quite some time and offer one of the most compelling building-block solutions for a multitude of different applications. The obvious target installation is in a data center where you have controlled cooling and power and don’t have to worry too much about noise.f

HP has been a significant player in the blade server market with a variety of products, and the company remains the overall leader in terms of market share. The latest and greatest servers from HP fall under the ProLiant Gen8 nomenclature.

By Gen8 HP means the eighth generation of servers, and the server line includes a wide range of models from the single-socket 1U DL320e up to the four-socket DL560. It also includes the BL660c Server Blade, which is the focus of this review. The BL660c is a full-height blade server that’s roughly comparable to the DL560 2U server in terms of processor speed and memory. We’ll be taking a closer look at this server in a future review as well.

Hands On with the ProLiant BL660c 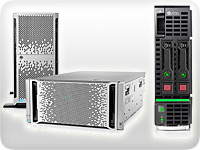 We were provided with an HP BladeSystem c3000 enclosure to host the BL660c. It came with an HP ProCurve 6120XG 10 GbE Blade Switch that is capable of handling up to 16 internal connections and eight external SFP+ slots. The c3000 enclosure supports up to four full-length blades or eight half-height modules in a 6U space. You can also mix and match different blade sizes as well.

Redundant power is key to keeping any system running, and the c3000 supports up to six independent power supplies. Our review unit came equipped with four, which is the recommended minimum number for the c3000. While it can run on three working power supplies, it’s considered a degraded condition and can cause a failure depending on the total power load from the blades installed in the enclosure.

A minimum of four active cooling fans is required, with capacity for as many as ten fans. Even with just four fans the c3000 generates an appreciable amount of noise under minimal loads. You wouldn’t want to have one of these things sitting in an office situation, as it would definitely interrupt a conversation.

The c3000 comes with the HP BladeSystem Onboard Administrator to manage and monitor every aspect of the enclosure and optional hardware. There are a whole host of features to monitor the current state or history of the power system, change different settings such as the management IP address, or directly connect to the management interface of any of the installed blades.

Figure 1 shows what you see when you click on the BL660c in the graphic on the right-hand side of the screen and select iLO. From this page you can launch either a web page to access the iLO management tool on the BL660c or a remote console using either Internet Explorer or a Java-based tool. Figure 2 shows the Java tool and its remote media feature which allows you to connect the remote machine to a local file such as the distribution image for installing a new operating system.

HP’s management tool for servers is called iLO, which is short for Integrated Lights-Out. The latest version of this tool is HP iLO 4 and represents a new level of remote and out-of-band management for HP servers.

Figure 3 shows the Server Power tab for the BL660c including the ability to perform functions such as a forced power cycle or a momentary press of the power button. Couple these with the ability to perform a true remote console to the system and you have everything you need to manage one of these systems from virtually anywhere in the world. New features present in iLO 4 include the ability to connect with iLO from a mobile device running either iOS 4.3 or Android 2.2 or greater. There’s also a standalone version of the remote console for Windows desktops available for download from the HP support site.

Compared to the price of a standalone server it is on the high side, but the blade concept delivers the capability for building a tightly coupled system of server, storage and networking components in a compact space with a single management interface. It’s a solution that definitely meets a need and does it in a cost-efficient manner from both an initial capital outlay and an on-going expense perspective.

The BL660c delivers high-end compute capacity to meet the most demanding requirements from virtualization to heavy-duty number crunching. Coupled with the high capacity networking provided by the four 10 GbE ports, the Proliant BL660c gives you a server ready for just about anything. And improvements to iLO and the BladeSystem Onboard Administrator make this an ideal solution for remotely deploying in any data center.