If you know anything about storing large amounts of data in the cloud, you’re probably aware of Amazon’s S3 object storage service. Lenovo has partnered with Coudian to provide a storage appliance that combines the Lenovo DX8200C platform with the Cloudian Hyperstore software to bring object storage to the enterprise. Lenovo sent us three of these systems to test out a 3-way redundant configuration. It actually works fine with just two boxes connected, which is how we did our testing. This setup was a little less complicated to get up and running, although adding the third system would not have been hard to do.

Replication can happen between systems connected locally or over the Internet. All communications use encrypted channels to ensure the data isn’t compromised.

The DX8200C platform provides a solid foundation for the Cloudian Hyperstore software. A total of fourteen 3.5-inch drive slots house 8GB SATA disks for a total of 112 TB of available storage. Two Micron 480GB SSD disks configured in a RAID 1 mirror serve as boot disks for the appliance. A single Intel Xeon CPU E5-2630 v4 CPU with 96 GB of memory provides more than adequate CPU and memory resources for this system.

On the networking front, the system includes two Intel X520 Dual Port 10GbE SFP+ adapters for a total of four 10 GbE ports. These serve primarily as replication ports between other systems. You could connect these systems directly without the need for a 10 GbE switch, if you so desired, and have four interconnected systems using point-to-point networking. Figure 2 shows the system information with hot links to bring up the page for details on specific components like cooling, power and other primary sub-systems. It’s also possible to restart the machine from the IMM should that be necessary. 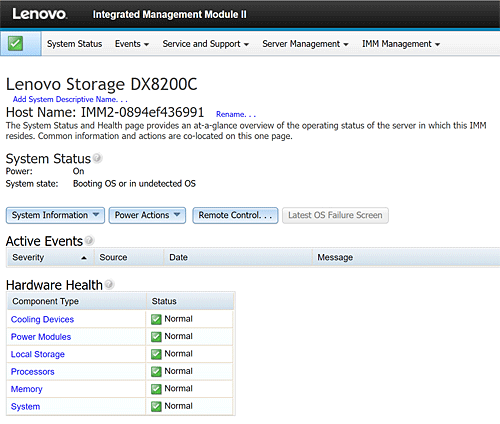 Software for the Lenovo DX8200C

Cloudian’s Hyperstore software comes ready to run on the DX8200C with minimal configuration. The primary items needing adjustment involve the IP addresses for the network ports. Cloudian provides a separate network configuration document to lead you through the process of adjusting the necessary files to accommodate your specific network environment. We were able to make the appropriate changes in under fifteen minutes.

Once the system is up and running you can manage everything through the Cloudian Hyperstore web interface. The first steps would be to configure users either manually or by connecting to a local active directory service.

Cloudian Hyperstore supports any LDAP-based authentication system should you not have an Active Directory Domain controller. Once connected to the directory service you must manually grant access to specific groups of users. The Hyperstore web interface provides a dashboard with the status of the storage system to include performance and capacity graphs (see Figure 3). This page has hot links allowing you to drill down for more detailed information such as that shown in Figure 4.

The alerts page shows any system message needing attention by an administrator. In this case, a log message indicating a drive repair had been accomplished successfully was displayed and needed to be acknowledged.

Managing users and storage also happens through the Web interface. Individual users connect to this same Web page to manage their data on the server.

To upload or download files from the server you must use the Web interface or some other programmatic method. Cloudian supports the Amazon S3 interface, which is also supported by a large number of backup vendors. Example code in Python and other languages for directly accessing files is readily available from a number of sources.

It should be mentioned at this point that OpenStack also uses the S3 API interface for their Ceph object storage platform. The Hyperstore Web interface includes the ability to enter Amazon credentials should you want to replicate your storage to the cloud.

This replication is bi-directional, which requires moving data into and out of Amazon’s S3 storage so it’s a good idea to understand your replication volume requirements before you turn this feature on to avoid a large bill from Amazon.

While object storage has been around for quite some time it hasn’t achieved mass adoption at the user level. Many enterprises have adopted object storage for high-end data projects, but it isn’t something the typical user would know about. That may change in the future as users demand more storage for personal use.

Cloudian also offers a file-based appliance that provides access to SMB and NFS protocols on the front end with object storage on the back end. While this would not be where you would want to provision your high-performance applications, it could serve as a cost-effective alternative to traditional NAS or SAN storage.