Intel has been producing the NUC (Next Unit of Computing) series for a while now, and the little devices have become quite popular as a demo platform for a wide range of server and cluster products.

The latest release in the Intel NUC family is the model NUC6i7KYK, also known as Skull Canyon, and it packs a ton of features into a tiny form factor. 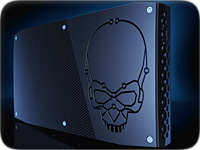 We recently acquired two of these units to serve as a test platform for a wide range of software technologies.

The small form factor device is only 28 mm tall and 166 by 211 mm on the edges. That works out to 1.1 inches tall and 6.54 by 8.31 inches around the outside. The functionality you get in that space makes this device a portable powerhouse. It also comes with VESA mounting brackets should you choose to mount the box to your favorite monitor.

While the Skull Canyon doesn’t have the most powerful CPU in the Intel arsenal, it does come with a Core i7-6770HQ, sporting a total of four cores running at 2.6 GHz (see Figure 1). The PassMark CPU benchmark gives it a 9679 rating, putting it at about a third of the current price / performance leader, the Core i7-2630QM. Memory capacity is a hefty 32 GB, which we populated with two Crucial 16 GB DDR4 SO-DIMMS. Inside the little box you’ll find two M.2 SSD slots, where we installed a Crucial 1 TB and a Sandisk 256 GB SSD. The smaller device is used as the OS boot disk while the larger drive serves as bulk storage. This NUC supports up to three 4K monitors with the embedded Intel Iris Pro Graphics. To top it all off you get dual-band Wireless-AC and dual mode Bluetooth 4.2 support as well.

Windows 10 is currently the most supported operating system in the way of drivers. For our purposes we wanted to take full advantage of the Thunderbolt 3 ports for high-speed networking, and the latest Windows 10 drivers work just fine.

Windows 10 offers support for Hyper-V and Docker containers, making it the perfect development and test platform for these technologies. No longer do you need a dedicated server box to test out your container or virtualization projects.

We used two of these devices to test a number of storage virtualization products designed to work on top of Hyper-V. While all of the products tested were designed for the Windows Server version of Hyper-V, we were able to install and run them on our NUCs running Windows 10 Creators Edition. All three of the vendors would be quick to point out that this is not a supported configuration, but it does work.

Noticeably missing from the Server versions is a driver for the Thunderbolt 3 port. This is a disappointing deficiency as it limits the amount of testing that can be accomplished for things like failover clustering using the high-speed networking capability. Hopefully this will be rectified in the future.

The advantages of having two server-class machines that fit in your carry-on luggage are numerous. For presentation and training scenarios this setup works quite well. A single machine can handle just about any Hyper-V or containers scenario you can throw at 32 GB of memory.

So far we haven’t been able to oversubscribe the memory with limited testing. We’ve even used some of Microsoft’s memory-hungry data science virtual machines with no problems.

Limitations on the Windows Server side primarily surround the lack of driver support for the Thunderbolt 3 port. It is possible to add additional Ethernet ports using the USB 3.0 ports and the proper adapter. With this approach you could accommodate up to five 1 GB Ethernet ports if you used Bluetooth for keyboard and mouse.

The base price for the NUC Skull Canyon is under $600 from a variety of vendors. Our units as tested came to just over $1100 for 32 GB of memory and the two SSD devices. Not bad for a totally portable workhorse of a system.