All you have to do is pop the lid on HP’s DL560 Gen8 server and you immediately see any number of engineering principles at work.

Simplicity in the layout of components makes this server extremely easy to service with quick access to memory modules, fans and other removable components. The layout also pushes higher wattage components to the front of the box and closer to the incoming cooler air. HP’s sea of sensors technology tracks temperature across the different sections of the box to ensure peak performance and intelligent use of the individually controlled fans.

The DL560 Gen8 is the kissing cousin to the BL660c Blade Server we reviewed last month and shares many of the same inner features, including the option for up to four Intel Xeon CPUs. With the added room of a full-size box, it’s able to support more memory to the tune of a whopping 1.5 TB using 32 GB RDIMMs.

As with other Gen8 servers, powerful compute capacity does not equate to high power consumption. HP has gone to great lengths to reduce the overall energy footprint of their Gen8 devices, and this box nails it. You can see the power profile in Figure 1 with the box under light load drawing an average of 133 watts over a 24-hour period.

About the only downside of this configuration is the lack of any RJ-45 Ethernet connections besides the management console. As a result, you’ll need a 10-GbE switch to connect this system to any external networks.

On the positive side, the standard management port provides access to the full range of iLO capabilities, including the remote device feature for installing an operating system. We used this feature to connect an .iso image of the Windows Server 2012 installation media and load the operating system without issue.

The rear of the server sports the Ethernet connections, a VGA video connector and four USB 2.0 ports. It would have been nice to have at least one USB 3.0 port for faster data transfer, and the four USB 2.0 ports are probably overkill for a server that’s typically locked away in a server cabinet somewhere.

On the front of the DL 560 is another VGA connector plus two USB ports for attaching a keyboard and mouse. You can also boot the server from one of the front-panel USB ports, if necessary.

HP’s iLO 4 is standard equipment for all Gen8 servers and provides everything a system administrator needs to remotely manage a server. It also provides multiple options for things like remote console (Java and .NET based) and even mobile support. We downloaded the HP Android tool from Google Play and installed it on a Toshiba AT200 Excite X10.

Figure 2 shows the same iLO power screen as seen in Figure 1 but on the tablet screen. Figure 3 shows the system info screen zoomed in on the Toshiba tablet. There’s also a version available for iOS in the Apple App store. Both the Android and Apple apps support servers with HP iLO 3 and later.

HP has a number of other management tools worth mentioning. First is the standalone remote console tool. This is an installable Windows application that gives you full KVM capability to any HP Gen7 or Gen8 server.

The other management tool is HP’s scripting and command line utility collection. One of the tasks that pops up from time to time is the need to change the remote administrator password on a list of servers. While you could do this by attaching to each server, it’s much more efficient to use an automated script.

That’s where HP’s RIBCL XML-based scripting language comes in. You can also do things like update the iLO firmware on all servers remotely using this same approach. 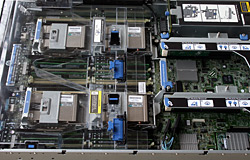 The HP DL 560 is an engineering marvel and is crazy fast. It can handle most any workload you could throw at it and then some. With a top end of 1.5 TB of memory, you could consolidate a rack full of servers onto this single box.

If you need redundancy, simply buy two DL 560s and cluster them together. HP’s management tools give you the remote capability to fully control and monitor every aspect of the system, including power consumption.

It’s hard to think of a situation where this server wouldn’t fit. Pricing starts out at $12,999 for the low-end models, and our system as tested retails for $22,609 . Not bad when you consider how many servers this product could replace.