It’s not uncommon for the release of a new generation of servers from the major vendors to coincide with a new series of processors from Intel, and the debut of the latest Intel Xeon E5-2600/1600 v3 chip continues that trend.

HP’s new Gen9 systems support a wide range of the new Intel Haswell processors with up to eighteen cores. The biggest challenge facing many IT managers will be which one to purchase. 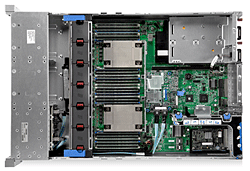 For the purpose of this review we were provided with an HP DL380 Gen9 2U server and an HP ProLiant BL460c Gen9. We previously reviewed both the DL380 Gen8 and the BL460c Gen8.

HP has gone beyond the typical hardware upgrade cycle to bring a number of new capabilities to both of these products. The fact that HP has released an updated version of the BL460c should indicate their commitment to the blade form factor. It also shows HP’s breadth of product and the ability to innovate while not leaving the existing customer base in the lurch.

One of the areas where HP has continually delivered enhanced capabilities is in the provisioning of a new server. The HP integrated Lights Out (iLO) management software makes it possible to do everything you need to do as a system administrator without the need to be in physical contact with the machine.

With the release of the Gen9 servers, HP has added a new feature to the HP iLO Intelligent Provisioning process to automate the installation of the HP VSA storage software. Figure 1 shows the screen you will see during the boot process with the function key options to launch System Utilities (F9), Intelligent Provisioning (F10), the Boot Menu (F11), and Network Boot (F12). 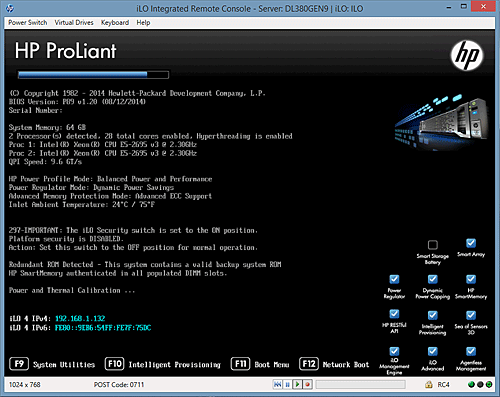 This screen shows the system components discovered, including CPU, memory and the current iLO IP address. You can also see some of the new features like HP SmartMemory with a checkbox indicating that the feature is enabled.

Processor and memory are the two biggest items on the new feature list, providing a higher number of cores per chip without increasing the overall power requirements. The new Haswell processors require DDR4 memory, which at this time will drive the total system price up somewhat.

On the positive side, you should see an overall cost decrease when you factor in operating costs, as these new systems should consume much less power than a comparable Gen8 box.

HP is offering their StoreVirtual VSA, which carries a license for 1TB free for any Intel Xeon E5 v3-based servers, including those from Dell, IBM, Lenovo and HP. StoreVirtual VSA works with both VMware and Hyper-V and can be managed from both Linux and Windows.

You can get your free license from HP’s StoreVirtual web site, which will require you to log in with an HP Passport account or register for one.

A number of new options on the initial boot screen provide quick access to System Information, the Boot Menu, Intelligent Provisioning and System Setup. Figure 2 shows the iLo System Information screen overview page. The main iLO screen contains a QR code with a link to a help page for the Gen9 servers. Figure 3 shows what you’ll see when you scan the code with an Android phone.We weren’t able to get the phone to focus on a monitor attached directly to the system, but it worked fine on a different monitor using the iLO Remote Console application. 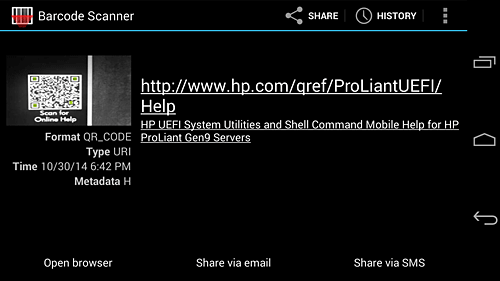 Speaking of HP’s iLO Integrated Remote Console, even though it does require an add-on license to work with a booted system, the remote console does work extremely well.

For Windows users you’ll need access to a .Net-based application that gives you full control over the system power and the ability to easily attach an .ISO file for loading new software or installing a new operating system. It works much better than other Java-based options and could even replace Microsoft’s remote desktop in many cases.

HP continues to innovate with each new generation of servers while maintaining the tradition of engineering high quality hardware. You can see the kind of attention to detail paid to things like cooling when you remove the cover.

Another point visible with the cover removed is the serviceability of the HP DL380, making it easy to get to things like memory slots should you need to do so. The versatility of the DL380 is shown in the variety of options available for disk drives, which can include up to twenty-four small form factor (2.5-inch) drives plus two additional drives on the rear of the box for a mirrored operating system volume.

This frees up the front of the device for placing all storage drives that could require removal. It also makes it easier to access should you need to add additional storage.

Pricing starts at $2,819 for a minimally configured system. Overall, this is a very solid box capable of supporting heavy duty workloads without missing a beat.