Building a server aimed squarely at the lowest end of the market presents an interesting challenge. Cost is obviously the biggest driver for this market and often steers buyers toward using a desktop machine or a refurbished server. 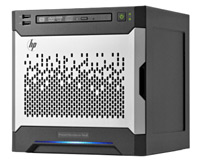 With that in mind, you then have to think about the minimum set of features a server of this type should include. Specs for components like CPUs, storage drives and memory directly affect cost and can quickly drive the overall price too high.

HP has produced a line of ProLiant MicroServers since 2010, receiving marginal success in the United States. Part of the problem with the original units was the low-end CPU and lack of upgrades, which limited its usefulness for many customers. Both of these issues have been directly addressed with the introduction of the new HP MicroServer Gen8.

CPU options now include an Intel Core i3 and up to 16 GB of memory. There are two 1GbE networking ports plus an additional port for out-of-band management. Two USB 3.0 ports on the front coupled with two USB 2.0 ports front and rear provide excellent expansion capability. Add to that an internal USB 2.0 port plus a microSDHC slot for boot media and you have a great set of options for your use.

Along with the introduction of the new servers comes a new 8-port switch specifically designed to marry nicely with the server box. This switch is fully managed and comes with the ability to detect all HP MicroServer Gen8 systems connected to any port. It also has the ability to aggregate two ports using the Link Aggregation Control Protocol (LACP) standard to provide up to 2 GB of network bandwidth.

HP has incorporated many of the features traditionally found only on enterprise-class servers into the new HP MicroServer Gen8. Our system as provided came with an Intel Core i3-3220T CPU running at 2.8 GHz, 8 GB of memory and two 2TB disk drives. Internal drive bays accommodate up to four large form factor disk drives.

The system also includes an embedded Smart Array B120i disk controller for enhanced hardware-assisted RAID. Before any operating system can be installed, you must configure your disks for whichever RAID level you want using the Array Configuration Utility (see Figure 1, which you can click on for a larger image) available from the boot screen. 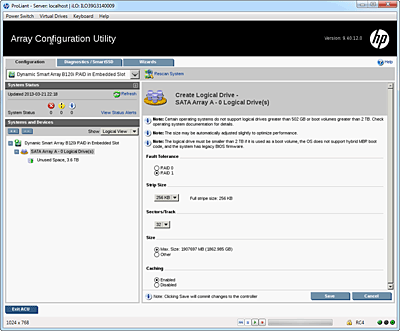 You’ll find a number of software tools included for setup and for diagnosing problems. The HP Insight Diagnostics tool provides detailed information about the system components and shows their current status (see Figure 2). 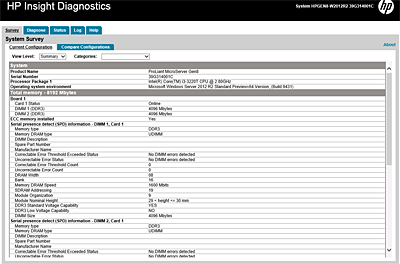 The first time you power up the system it will attempt to obtain an IP address for the iLO management agent using DHCP. Subsequent boots will display the iLO IP address at the bottom of the boot screen (see Figure 3). You can access the full iLO functionality with any web browser able to connect to that IP address. 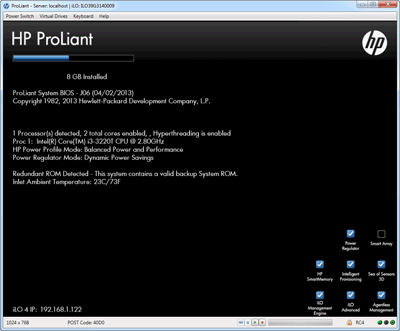 An Intelligent Provisioning feature guides you through the process of installing an operating system on the HP MicroServer Gen8. Some of the options, such as VMware ESXi, require you to download a custom HP image before beginning the process.

We were able to successfully install both ESXi and Microsoft Hyper-V Server 2012 onto a USB key and boot the HP MicroServer Gen8 with a minimal amount of effort. The key to success here was the custom HP ESXi image and the automated driver installation for Hyper-V Server.

This could really be a big deal for any enterprise looking at the possibility of using one of these systems as a branch-office server. With iLO you have the ability to connect to a virtual console on the machine and remotely connect local resources such as an ISO file or physical DVD drive, allowing them to appear as local resources on the remote machine. This makes installing new software or updates extremely easy.

The starting price for the new HP ProLiant MicroServer Gen8 is $449 for a system with an Intel Celeron G1610T, 2GB of memory and no hard drives. The base price for the Intel Core i3-based system is $529. You can purchase memory from HP or do it yourself. Hard disks are also optional and can be installed by the end user or purchased from HP.