It seems like rack computer systems get all the attention these days as manufacturers try to pack more capacity into smaller 19-inch spaces. Dell has not, however, given up on the server tower space, as can be seen in the PowerEdge T620.

This box packs two Intel Xeon processors, up to 768GB of memory and an eye-popping 32 2.5-inch disk drives. The best part is how quiet the unit runs even when under load, quiet enough in fact to work well in a small 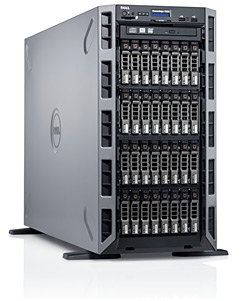 The system is equally at home in a data center as well, and it can be configured as a 5U rack-mountable unit if you go that route. You can even configure the system with an 1100W DC power supply if needed.

The case will handle two independent power supplies and supports hot-plug replacement for continuous operation. Dell’s Titanium power supply delivers some of the highest efficiency numbers in the industry at 96 percent under 50 percent load. The system supports hot-plug hard drives and redundant fans as well.

Expandability and flexibility are the two key words when it comes to the PowerEdge T620’s design. A total of 24-DIMM slots allow for the whopping 768GB maximum number when using 32GB memory parts. Besides the 32 2.5-inch drives already mentioned, the system can be configured with 12 3.5-inch drives.

On the disk controller front, a new PERC S110 software RAID solution supports RAID 0, 1, 5 and 10 on a maximum of four hot-plug SATA drives. This solution might appeal to smaller organizations on a tight budget and not needing the higher performing hardware RAID cards.

The PCIe slots work well with the latest GPUs, including both single and double width. This arrangement supports both virtual desktop infrastructure (VDI) deployments and high-end imaging applications.

Our review unit came with an Enterprise version of Dell’s iDRAC7 management software. The PowerEdge T620 provides a dedicated Ethernet interface on the rear of the system so that all management traffic can be isolated on a separate network if so desired. Complete remote control, management and monitoring are possible with this configuration. Figure 1 shows an example of the temperature monitoring page from the iDRAC7 console. 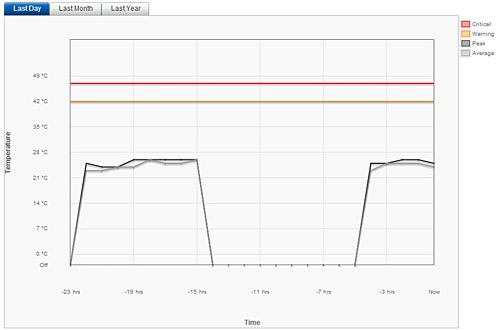 OpenManage Essentials is a relatively new offering from Dell that complements iDRAC and specifically applies to small-to-medium enterprise network environments. It’s available as a separate download from the Dell TechCenter Systems Management wiki page. It’s meant to be installed on a system configured as a management workstation and does require a number of additional prerequisites. These include the latest DRAC Tools from Dell, IIS and the SNMP service.

This solution would appeal to any organization with more than a few servers looking for a way to manage and monitor these systems from a single console without spending additional capital funds for additional software. For large implementations Dell’s OpenManage tool also integrates with a variety of systems management products to include Microsoft System Center, VMware vCenter, HP Operations Manager, IBM Tivoli Netcool and CA Network and Systems Management.

The PowerEdge T620 is a prime example of Dell’s attention to detail and focus on innovative engineering. It provides a solid platform for building out a highly scalable departmental or remote office server with as much as 48 TB of disk capacity. Couple that with the latest Intel Xeon processors and 768GB of memory and you have a monster of a system.

While this system won’t provide the clustering capability of Dell’s new PowerEdge VRTX system, it also doesn’t carry the same hefty price tag. If you don’t need the high availability of a cluster solution, you would do well to consider the PowerEdge T620 for your next server replacement or upgrade. It’s definitely worth a look.