Commodity servers typically come with run-of-the-mill specs to go along with a low price. The 1U form factor almost always means limitations on disk, CPU and memory.

Dell has set out to change that impression with the PowerEdge R230. This addition to the Dell PowerEdge line sets a new standard for the lowly 1U server. 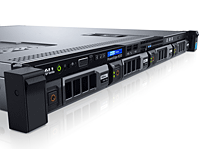 To start, the PowerEdge R230 is powered by the Intel Skylake family of processors that offers a variety of features including several versions focused on compute-intensive workloads with no on-chip graphics.

Our server review unit came with an Intel E3-1230 v5 processor that runs at 3.40 GHz, 16 GB of DDR4 memory, two 2 TB SAS disk drives attached to a PERC H330 adapter and a total of three 1 GB Ethernet ports, including the management port.

We loaded Windows Server 2012 R2 using the DVD drive to test the basic functionality of configuring the system for the first time (see figure 1 below). The PowerEdge R230 supports up to 64 GB of memory, double the maximum of the PowerEdge R220 that the R230 replaces.

A single LGA1151 CPU socket holds a processor from the Intel E3-1200 v5 four-core “Skylake” family. Four memory slots make it possible to use 16GB DDR4 devices, for up to a maximum of 64GB of memory.

Two PCIe 3.0 slots double the I/O throughput of the previous PCIe 2.0 standard. This makes a big difference with disks connected to the R230/PERC9 controller. Speaking of storage, the PowerEdge R230 supports a wide range of rotating and solid state disk devices of the 2.5- and 3.5-inch variety.

The fan-noise was more than bearable for an office environment, with a moderate level during reboot / startup settling down to a quiet hum after a few minutes. Boot time from a powered-off state into the Windows Sever 2016 TP3 login screen was a respectable average of 62 seconds, although the 16GB of memory definitely affects the overall startup time. The two disk drives were configured in RAID 0 mode, although the PERC H330 does support HBA mode.

Two USB 2.0 ports and a VGA connector on the front panel allow you to connect a keyboard, mouse and monitor, if necessary. The rear panel has two USB 3.0 ports and three RJ-45 Ethernet ports, plus a serial and VGA for management. Another internal USB 3.0 port can be used for boot media in a VMware environment. A single 250W power supply delivers more than enough juice for all the components you can stuff into a 1U device.

The PowerEdge R230 runs all supported versions of Windows Server along with VMware’s vSphere 6.0 and Red Hat Linux. Hypervisor support includes Microsoft Hyper-V, Citrix XenServer and VMware vSphere ESXi. We were also able to load the TP3 version of Windows Server 2016 with no issues.

The internal USB 3.0 port provides a way to boot into VMware ESXi without using any locally-attached disks. This scenario would work great for a VSAN deployment, although the system isn’t on the VMware Hardware Compatibility List (HCL) as of this writing.

Dell’s latest iDRAC8 (see Figure 2 below) delivers a number of new features plus recognition of the latest hardware. New capabilities include support for the Data Center Manageability Interface (DCMI) 1.5 standard, new performance monitoring screens and the ability to do a system wipe. The Lifecycle Controller, available by pressing the F10 key during boot up, offers a number of maintenance features that can be accessed remotely using the iDRAC8 remote console. Full support for the IPMI 2.0 standard lets the PowerEdge connect with a variety of management tools, including Dell’s OpenManage suite of products. OpenManage also integrates with Microsoft System Center and VMware vCenter.

For scripted management Dell offers a community-supported Windows PowerShell module that makes it possible to remotely configure and manage servers in an automated fashion. The same technique can be used to script the Lifecycle Controller to automate hardware configuration.

Dell provides another community-supported management option in the form of Recite. Recite is a Python-based tool that interacts with the Dell Lifecycle Controller API using the WS-Man protocol.

This tool lends itself well to a Linux-based environment should you wish to control and manage your servers that way. The Recite Wiki has links to download the GIT repository as well as descriptions of all functions and a tutorial video.

The Dell PowerEdge R230 delivers solid value in a 1U chassis. The new processor and memory technology from Intel double the capacity from previous generations. Couple that with support for the new PCIe 3.0 standard and you have a fully capable processor in a small package.

Our review system as configured with CPU, disks and memory prices out at $1,594.58 on the Dell store. Bumping the memory up to 64 GB pushes the price up to $2,262.45, which is still reasonable for a low-end server.