New Intel Xeon processors often mean new and improved server hardware from the major vendors. In conjunction with the release of the Intel Xeon E5-2600 v3 family (Haswell), Dell has rolled out a portfolio of new server products.

This rollout represents Dell’s thirteenth generation (13g) of servers and includes both rackmount and tower designs. We reviewed the Dell PowerEdge T620 in November of last year and were provided with the new PowerEdge T630 for this round of upgrades.

The PowerEdge T630 looks almost identical to the PowerEdge T620 but has been refreshed on the inside with many new parts. With updated CPU and new DDR4 memory, you get more bang for the same buck in the same space.

More processing power and memory translates into more users for a VDI deployment or faster response times for a departmental database server. As a result, the number of use cases for this system has increased along with the new capabilities.

The system also fully supports the highest CPU in the family, which packs eighteen cores. And more cores does not automatically translate to higher power usage, as these latest chips actually consume less power while delivering more processing capacity.

On the memory front, the PowerEdge T630 requires the latest DDR4 DIMMs, which use between forty and fifty percent less power than the same DDR3 parts. This translates into significant power savings when you fill all twenty-four memory slots. Currently available DDR4 parts limit total memory to 768 GB, but that number increases to 1.5 TB when the 64 GB DDR4 parts become available.

Our review unit came with sixteen SAS disk drives connected to a PERC H730P with updated firmware. With new firmware comes the ability to convert individual disks connected to the controller to Non-RAID devices (see Figure 1). 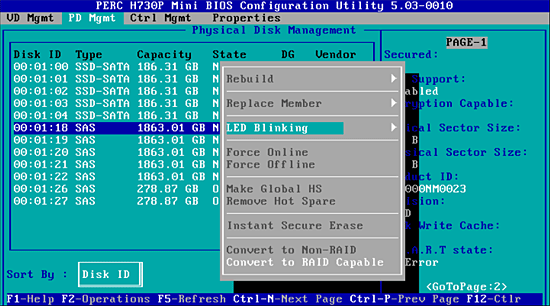 It’s this capability that makes it possible for Windows Server 2012 R2 to use these disks as part of a Storage Spaces volume. For extreme disk I/O requirements you can add up to four Express Flash PCIe SSDs.

The PowerEdge T630 has plenty of room for expansion. A total of eight PCIe slots support a wide range of PCI cards, including the latest PCIe 3.0 standard with four full height / full length x16 slots, allocated two per CPU.

Two PCIe 2.0 slots with x4 lanes provide support for any legacy cards should you have a need. Power supply capacity of up to 1600W makes it possible to fully load up the system without having to worry about overloading.

All Dell 13g systems include full support for the most popular operating systems and hypervisors. Full support means providing the underlying firmware and drivers to support Microsoft’s Storage Spaces and VMware’s Virtual SAN.

The PowerEdge T630 could support up to four VMware VSAN disk groups with each group containing a single SSD and the maximum of seven HDDs. Couple that with the huge amount of memory available, and you could build a killer VSAN cluster with three PowerEdge T630 systems. Two of the Seagate 300 GB disks have been configured in a RAID 1 mirror for the operating system, while the remaining fourteen disks are available to be configured as a storage pool. With the addition of an add-on 10 GB networking card this system could easily fill the shoes of a highly available SMB 3.0 storage system.

Dell’s iDRAC 8 has been improved with support for the new Intel chips and new remote management options. You still need an extra license if you require the ability to connect remotely to the virtual console. This feature is not available in the basic entry-level version of iDRAC. Another option for remote management is the Dell OpenManage Mobile (OMM) Android application. Figure 3 shows the screen of the OMM app connected to the PowerEdge T630. Prices start at $1509 for a minimally configured PowerEdge T630. A low entry-level price brings the possibility of building a proof-of-concept cluster for Microsoft Windows Server 2012 R2 or VMware Virtual SAN without dropping a bundle of money. While this system works great in an office environment, it works just as well if you add a rail mounting kit and install it in a data center rack.