Choosing the right combination of servers is the trick, 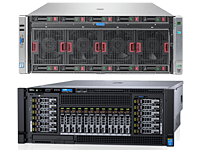 and the choice depends greatly on the kinds of workloads you need to support. Two new systems from Dell and HPE provide contrasting options to address your specific needs.

Today’s big data workloads beg for lots of CPU cores and memory. Both Dell and HPE deliver on that requirement with the Dell PowerEdge R930 and HPE ProLiant DL580.

Our test systems came equipped with four Intel Xeon E7-8890 v3 processors plus 512 GB of memory, although both systems can handle up to 6TB if you max out the 96 DIMM slots. Beyond those details are some very different capabilities in the two systems, which we’ll discuss in more detail shortly.

Local storage is the name of the game with the Dell PowerEdge R930. One quick look at the front panel reveals twenty-four small form factor (SFF) drive slots. If you look closer, you’ll see a total of eight dedicated NVMe slots split across two PCIe interfaces.

That leaves sixteen slots for 12Gb SAS HDD or SAS/SATA SSD drives to serve as a capacity tier. Dell offers 3.2 TB NVMe drives, so you could outfit this system with 25.6 TB of super-fast flash storage.

Couple that with 3.84 TB SAS or SATA SSDs, and you’ve got 61.44 TB of read intensive flash. Putting that kind of storage along with sixty CPU cores gives you a monster system in a box.

While the HPE ProLiant DL580 sports the same CPU and memory options as the Dell PowerEdge R930, it has more of a focus on modern GPU intensive workloads.

Our test system came with a total of eight full-length 16X PCIe slots and a beefy power supply to support double-wide GPU boards. We test installed an Nvidia Tesla GPU card to get a feel for what this system can do.

Local storage does not play as prominent of a role with a total of ten available SFF slots. The HPE ProLiant DL580 does support NVMe drives should you have a need for fast local storage.

Both Dell and HPE offer a variety of networking options via both on-board and add-in cards.

The Dell PowerEdge R930 came with an Intel X540 10GB Ethernet card that supports both 1 and 10 GbE connections. Dell also offers a number of networking options, including the Mellanox ConnectX-4 dual-port 25 GbE adapter.

On the power front you have a number of options with both systems. Both the Dell PowerEdge R930 and the HPE ProLiant DL580 come with four power supply slots.

Dell offers a choice of either a 750W or a 1100W individual power supply. You must choose the configuration you’ll need from a matrix of non-redundant, redundant and failover options. A minimum of two power supplies must be installed for redundant operations and three for failover.

Both Dell’s iDRAC and HPE’s iLO provide out-of-band management capabilities for connecting directly to the server. Each management platform includes the basic tools you would expect to see for monitoring the current status of the system and performing basic administrative functions.

Both management platforms also offer remote access to the system console, although HPE gets the slight edge here with an installable Windows app. The Dell remote tool has been based on Java, which could cause some issues if your browser has Java execution locked down; however, the company’s latest iDRAC release offers an HTML5 version of the remote console that does not require Java. 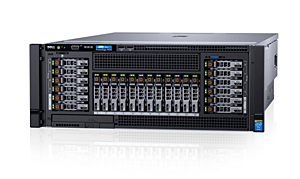 Automating the management of remote systems in a Microsoft shop typically involves the use of Windows PowerShell. Both Dell and HPE provide PowerShell modules for connecting to iDRAC and iLO, respectively.

Available PowerShell cmdlets make it possible to automate the process of updating firmware or BIOS images, collecting inventory and much more.

You can download the HP Scripting Tools for Windows PowerShell or the Dell PowerShell cmdlets for PowerEdge Servers for free.

Prices go up quickly as you might imagine when you add lots of memory and the high-end processors. Other configuration options like higher wattage power supplies and fast networking components can run the price up as well.

Both of these systems deliver a huge amount of power in a single 4U box. If you have a server or workload consolidation projects in your future, you would do well to consider one of these workhorses for your solution.