Cisco’s UCS Mini Is Ready for any Workload

If you look at the hardware running many data centers, you’ll more than likely find server blades in the mix somewhere. Cisco’s Unified Computing System (UCS) was first introduced back in 2009 and has grown beyond the original B-Series blades to include the C-Series of rack-mount 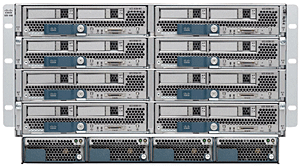 The Cisco UCS Mini is built on top of a UCS 5108 blade server chassis plus the UCS 6324 Fabric Interconnect (FI), which resides inside the chassis.

Our demo system came with four B200-M4 blades plus two 6324 FIs. The secret sauce to Cisco’s UCS platform is in the UCS Manager software. When you couple UCS Manager with the entire portfolio of Cisco hardware you have an extremely flexible and scalable solution.

The UCS 5108 blade server chassis is built like a tank, and little details like the removal handle secured by a thumb screw show some thought went into the design.

Cisco also offers 48VDC and 200 – 380 VDC options should your environment be equipped for DC power.

Each node has a console port connector on the front that provides two USB ports, a VGA and serial port connectors. The disk drives can be removed from each node by simply sliding the removal arm and pulling. You’ll have to move up to a full-height blade to get four disk drives.

Cisco is first and foremost a networking company, and that focus can be seen in the Fabric Interconnect module. Each 6324 comes equipped with four SFP+ ports plus one QSFP+ port supporting up to 40 GB of bandwidth.

Each SFP+ port can be configured as an uplink port, 1 or 10 Gbit Ethernet, Fibre Channel over Ethernet (FCoE) or as a 2 / 4 / 8 Gbit Fibre Channel port. If you have more than one 5108 chassis, you must use a Fabric Extender in the secondary chassis to extend the management and control of the FI.

The Cisco UCS Manager supports the entire line of Cisco compute platforms and is the single control point for all UCS hardware. Cisco currently offers and supports both a Java and an HTML5 version of the UCS Manager (see Figure 1). The release notes for version 3.1 describe UCS Manager as “an intuitive GUI, a command-line interface (CLI), or an XML API.” Cisco offers both a PowerShell and Python SDK for anyone interested in automating the management process using these tools.

Cisco UCS Manager uses a tab-based user interface to group the management and control of different functional areas together. Figure 2 shows the main console with the Servers tab selected on the left-hand side and the General tab selected showing the current status of Server 1. 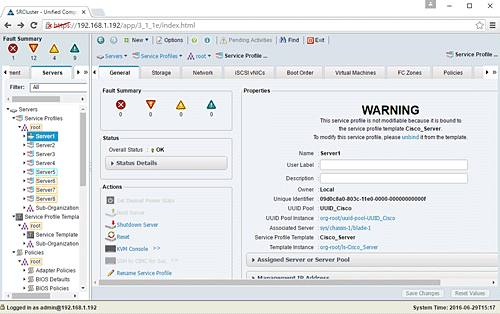 Figure 3 shows the shutdown dialog, which performs an orderly shutdown of the operating system running on Node 1 which, in our case, was VMware ESXi. Figure 4 shows the context menu presented when you right-click on the graphical view of the front of the 5108. UCS Manager supports the use of service profiles and templates to automate the process of provisioning new servers with specific configurations.

This makes it possible to build profiles that target different types of storage or networking and then choose the appropriate template based on a target workload like a database server or a compute node. All profiles and templates are created from the UCS Manager interface and are stored as XML files.

You have a number of options on the networking side when connecting to the UCS 6324 Fabric Interconnect, including Ethernet, USB and serial. It would be typical to use either the USB or serial console the first time you power up the system for configuration purposes.

Once that’s done you shouldn’t need to connect directly to the system again unless some type of catastrophic failure occurs. All further configuration would be accomplished using the Ethernet management port and UCS Manager.

Figure 5 shows the graphical depiction of the rear of the 5108 chassis displaying a single SFP+ port active on each FI. This graphical image is active as well, supporting a right-click operation that reveals all available options for that module. Using this method, an administrator can quickly enable or disable ports, open the Fabric Interconnect navigator, or manage any of the other ports. The FI navigator brings up a more detailed image of the 6324 with the same active image and control.

When you get right down to it, you’ll find nothing “mini” about the Cisco UCS Mini. It’s a full-fledged blade server platform with the ability to scale up to meet the large majority of enterprise needs. While it might not fit the bill for a huge data center, it can definitely hold its own for any workload you want to throw at it.